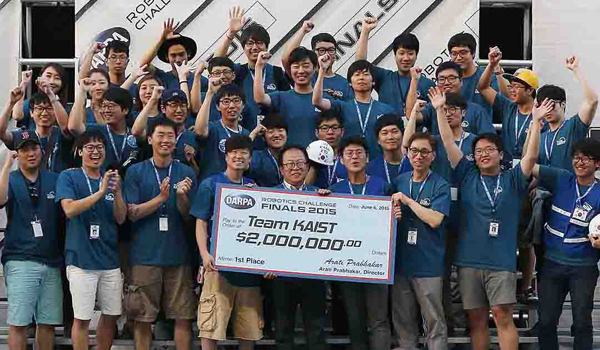 A team at Kaist led by professor Oh Jun-ho cheers after winning a robotics competition held in the United States on June 6. Provided by Kaist, DARPA

Hubo, a robot created by a team at the Korea Advanced Institute of Science and Technology (Kaist), has become the world champion at the Robotics Challenge Finals, organized by the U.S. Defense Advanced Research Projects Agency (DARPA).

The DRC-Hubo, a bipedal humanoid, became the $2 million prizewinner in the contest that tested how robots react in a simulated disaster environment. The Hubo outperformed its rivals at overcoming obstacles and completing tasks during the competition held in California for two days from June 5.

The contest was organized to encourage the development of robots to deal with disasters such as the Fukushima nuclear incident in Japan. DARPA tested the participating robots in eight categories: driving a car, stepping out of the car, opening a door, locking a gas valve, drilling a hole in a wall, overcoming obstacles and walking up stairs.

The prize was given to the robot that finished the tasks the fastest. 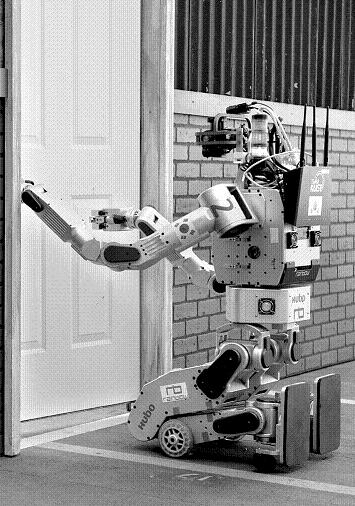 The robot DRC-Hubo, which was developed by the team at Kaist, completes a task simulating a disaster situation during a competition. Provided by Kaist, DARPA

A total of 24 teams from around the world, including one from NASA, competed. There were two more Korean competitors: a group from Seoul National University (SNU) and one from robotics company Robotis.

Team IHMC Robotics finished second, winning $1 million. Tartan Rescue came in third and will take home $500,000. Both were among the favorites based on their strong performances on day one of the finals.

SNU came 12th while Robotis was in 15th place.

“Our ultimate goal is to make a more perfect robot,” said Prof. Oh Jun-ho, who led the team at Kaist. “These robots will be used in situations humans can’t perform in like at a nuclear reactor and in a war, in order to help mankind. I think there is no end for robot development technology.”

In 2004, Oh developed the country’s first humanoid, Hubo, and later created the Hubo FX-1, which can carry a person. The DRC-Hubo was created by a team formed with four members of Rainbow, a Kaist venture firm, as well as four graduate students and 10 undergraduate students from the university.