Students to bike across U.S. for ‘comfort women’

Students to bike across U.S. for ‘comfort women’ 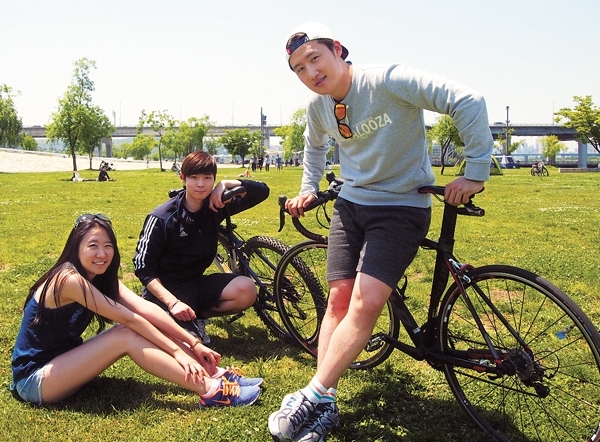 From left, Kim Ye-hun, Baek Deok-yeol and Sim Yong-seok, the three 22-year-olds behind the 3A Project. They meet to discuss flash mobs and special performances for the rallies and demonstrations they will host in the U.S. this summer. The project is still looking for sponsors. Provided by Kim Ye-hun

Sim Yong-seok and Baek Deok-yeol, former Coast Guard comrades and current university students, are getting ready to spend the rest of their summer in a saddle.

The two 22-year-olds will embark on a 6,000-kilometer (3,728-mile) cross-country bike ride from Los Angeles to New York City from late June through September in an effort called the “3A Project,” which aims to raise awareness about the “comfort women” issue.

Comfort women are the women and girls - mostly Korean - who were forced into sexual slavery by the Imperial Japanese Army during World War II and made to serve in military brothels.

The project’s “three A’s” stand for the words “admit, apologize and accompany.” It aims to convince the Japanese government to admit its role in the comfort women issue, to apologize for its past actions and, finally, to accompany the victims in finding solace.

The two young bikers will stop at different cities and towns on their ride across the country to collect signatures for a petition requesting that Japan formally apologize for its part in enslaving the women. They will also host political rallies and demonstrations at places like the Consulate-General of Japan in Los Angeles and the Embassy of Japan.

Sim and Baek have chosen to focus their efforts abroad as they believe involving other nations that have not been directly harmed by Japan will put more pressure on the nation’s government to address the issue.

The creators of the project became interested in the comfort women issue when they were stationed under the Coast Guard at Dokdo, Korea’s most eastern islets, over which Japan frequently claims sovereignty.

“When I saw soccer player Park Jong-woo almost get barred from receiving his bronze medal [at the] London Olympics because of his Dokdo ceremony, I applied for the Coast Guard at Dokdo, which has an applicant success rate of 5.56 percent. Once I was on Dokdo, where the issue of comfort women is frequently mentioned [alongside the dispute over Dokdo], I couldn’t help but become interested,” said Baek.

Korean football player Park Jong-woo had his bronze medal withheld after holding up a sign that read “Dokdo is our land” while celebrating the Korean team’s defeat of Japan in the soccer semifinals at the 2012 London Olympics.

“Just as I was facing enlistment, the Dokdo issue took off and I really wanted to serve on Dokdo. I exercised daily and diligently to prepare for the interview. Then I became more interested in the issue of comfort women and was shocked after seeing ‘Herstory,’ a horrifying animation film based on testimony from [one of the comfort women],” said Shim.

After Baek and Shim resolved to advocate on the issue, one of their peers introduced them to Kim Ye-hun, a recent graduate from Duke University in the United States.

Kim, who volunteered for the Korean Council for Women Drafted for Military Sexual Slavery by Japan during a university break, took on the stateside organization of the project.

“There were some who said [we were] young kids acting rashly. But more welcomed us for trying to raise awareness about the objective truth while excluding nationalist content as much as possible,” said Kim.

During preparations for their trip, Sim and Baek met with a surviving comfort woman and went to the House of Sharing, a home for victims of wartime sexual slavery.

They’ve also begun studying history to use knowledge and logic to address the Japanese government’s efforts to avoid inculpation on the issue of comfort women.

In addition to reaching out to history scholars and Korean-American associations throughout the U.S. for support, the 3A Project creators are contacting figures who have raised their voices on the issue of comfort women. One such person is Mido Choi, one of the organizers of a silent demonstration regarding wartime sexual slavery during Japanese Prime Minister Shinzo Abe’s visit to Harvard University in April.

Sim, Baek and Kim are also reaching out to Jeon Hye-yeon, 42, who organized a cultural event to raise awareness around Korean Comfort Women Day in Glendale, California.

The 3A Project is a strong showing of solidarity amongst members of the younger generation in raising awareness about the issue of comfort women, but efforts to make the project a reality are ongoing.

Baek and Sim have enough money for their round-trip tickets to the United States, but they have yet to acquire the funds needed for the political rallies and demonstrations they are looking to stage across the country.

Money aside, the two remain resolute.

“We don’t know when the remaining surviving comfort women will pass away, so there’s not much time left,” said Baek.