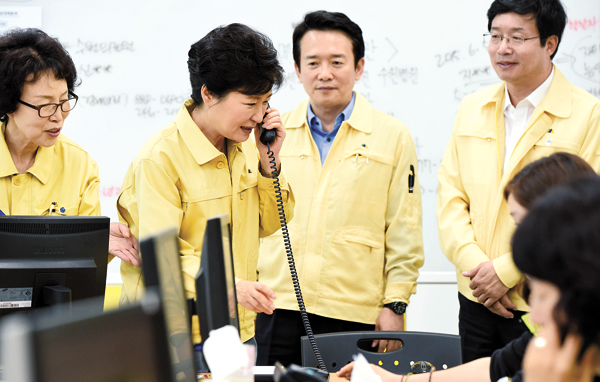 During her visit to the Gyeonggi MERS emergency headquarters on Friday, President Park Geun-hye talks to a resident self-quarantined at home.[Joint Press Corps]

President Park Geun-hye made the decision to delay a visit to the U.S. and a summit with U.S. President Barack Obama over the objection of ruling Saenuri Party Chairman Kim Moo-sung.

Officials say this is another example of ongoing communication problems between the president and the ruling party.

On Wednesday, Park announced her decision to postpone the trip to the United States, which was scheduled to kick off Sunday, to focus on public safety as the country fights the outbreak of Middle East respiratory syndrome (MERS).

When this was conveyed to two senior lawmakers of the Saenuri Party, Kim Tae-ho and Rhee In-je, they said at a Supreme Council meeting that the U.S. trip should be carried out as planned.

At 10:30 a.m. Saenuri Chairman Kim called Chief of Staff Lee to convey the party’s view that the U.S. trip needed to be carried out.

A senior party official said if the president “already decided to cancel the trip, she could have just notified us - why bother with the pretense of asking our opinion? No matter how little communication there is between the party and Blue House, how can the party’s opinion be completely brushed aside on something as important as the U.S. visit.”

The trip would have included a summit with Obama at the White House on Tuesday. The visit came at a sensitive time after North Korea test-fired a submarine-launched ballistic missile last month, and follows Japanese Prime Minister Shinzo Abe’s U.S. visit in April.

“President Park received numerous reports the day before on whether she should or should not go [to the U.S.],” a Blue House official said, “and she made the decision after much deliberation late into the night.”

It is said the Foreign Ministry advised that the trip be made even it the schedule had to be curtailed.

Park is said to have last heard from her advisers on Tuesday night, and then informed her advisers of her decision the next morning before contacting Foreign Minister Yun Byung-se.

The canceling of the trip also had the effect of highlighting to the outside world Korea’s struggle with the MERS outbreak.

Saenuri Rep. Choung Byoung-gug on Thursday received a call from a Japanese lawmaker asking if it was safe for a delegation to follow through with a visit to Seoul. A group of Korean and Japanese lawmakers were set for a friendly football match on Saturday.

Obama said he fully understood Park’s decision in a phone conversation with her Friday morning, the Blue House said in a statement.

It added that Obama said he supports Park’s leadership in the 20-minute conversation.