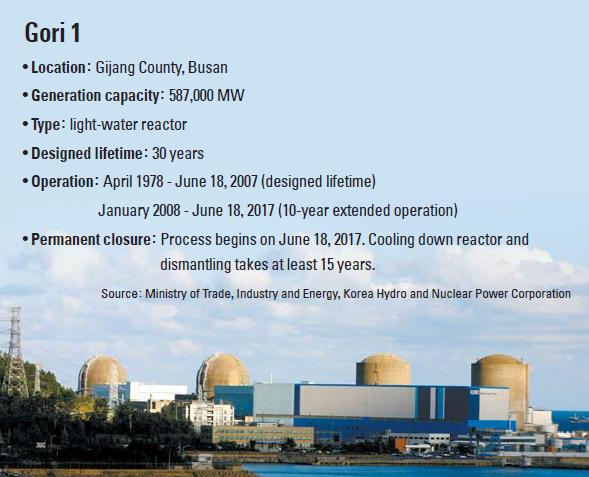 The Korean government on Friday decided to close the nation’s oldest nuclear reactor, Gori 1, bowing to pressure from politicians and a public worried about its safety.

This is the first time that Korea decided to permanently close a plant in 37 years of producing nuclear power.

Gori 1 in Gijang County, Busan, was the nation’s first commercial light-water nuclear reactor. It started operation in 1978, and was allowed a 10-year extension when it hit its 30-year anniversary in June 2007, which was its originally conceived lifespan. Technically the unit is allowed to keep operating until June 2017.

The law requires the nuclear authority and the plant’s operator to decide the unit’s future two years before the extension ends.

A National Energy Commission meeting hosted by the Ministry of Trade, Industry and Energy with local nuclear experts was held in central Seoul on Friday afternoon to come to a decision. It recommended the nation’s sole nuclear power operator, Korea Hydro and Nuclear Power (KHNP), permanently close the Gori 1 unit.

“The government and a group of experts have concluded that it is advisable to permanently close the Gori 1 reactor for long-term development of the Korean nuclear industry. We will deliver our suggestion to the KHNP,” said Energy Minister Yoon Sang-jick at the meeting.

Yoon said two new reactors will replace Gori 1. He said Korea can also learn from Gori 1’s shutting down and become a player in the industry of shutting down aging nuclear reactors.

Of 19 energy commissioners, most supported closure, the Ministry of Trade, Industry and Energy said, although the decision wasn’t based on a vote.

The commissioners pointed out that Gori 1’s capacity of 587,000 kilowatts is relatively small compared to three other reactors in the Gori complex, so it won’t have much impact on the electricity supply.

The KHNP said it plans to confirm the government recommendation at its board meeting next Tuesday.

The company said it plans to prepare the technologies for closing the plant by June 2017, when Gori 1 officially stops operation, and submit a closure plan by July 2018, which includes where to move its spent nuclear fuel. The KHNP can start the actual dismantling process after its plan is approved by the Nuclear Safety and Security Commission.

The actual dismantling is estimated to take at least 15 years.

When Gori 1 stops operation in June 2017, the reactor rods should be cooled down for at least five years. It will take another six years to dismantle the concrete dome.

The Energy Ministry and KHNP have estimated the process to cost about 603.3 billion won ($541.2 million), which will be paid by KHNP.

As 11 more nuclear reactors will reach the end of their lifetimes within the next 15 years and the rest by 2051, closures may cost Korea up to 14 trillion won, the government said.

The Energy Ministry wants to nurture nuclear reactor closure technologies. It said Korea already has about 70 percent of the 38 types of reactor dismantling technologies, while advanced nuclear nations like the U.S. have all of them.

KHNP had hoped to operate Gori 1 for another 10 years, saying it passed the safety tests by Kepco E&C in May. It is estimated to generate electricity worth about 179 billion won over the next decade.

But the ruling Saenuri Party, the opposition New Politics Alliance for Democracy, people living around nuclear plants in Busan and Ulsan, South Gyeongsang, and electricity experts have called for permanent closure, saying Gori 1’s facilities are too old and potentially dangerous.