Fighting the virus one day at a time

Fighting the virus one day at a time 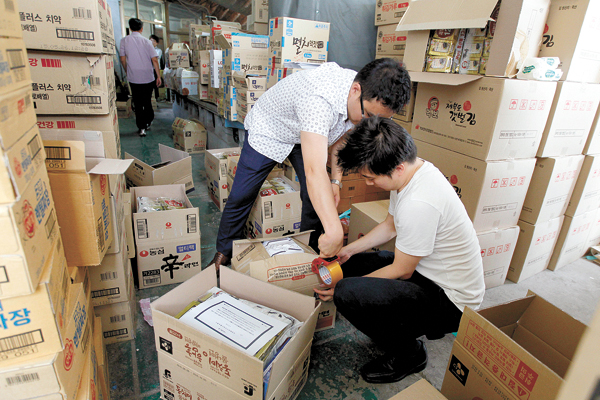 Employees at the Gangnam District Office pack basic necessities to deliver to people in quarantine. By Shin In-seop

As the number of confirmed patients with Middle East respiratory syndrome (MERS) continues to grow, the district of Gangnam in southern Seoul is at the center of the battle with the virus. Many of the patients were infected at the Samsung Medical Center in the district.

Fighting on the frontline are workers from the Gangnam Community Health Center and the Gangnam District Office.

The Gangnam Community Health Center, which normally operates from 9 a.m. to 6 p.m., is now open from 8 a.m. to 8 p.m. A conference room on the third floor serves as the war room, where health counselors are available 24 hours a day.

“I’m the parent of an elementary school student and my child’s teacher recently visited the funeral hall at Samsung Medical Center in Seoul,” one caller asked. “Shouldn’t the teacher be barred from going to work?”

Samsung Medical Center in Ilwon-dong, Gangnam, was where Korea’s first MERS patient, who caught the virus last month while on a 16-day business trip to the Middle East, was confirmed. Patient No. 14, who contracted the disease directly from Patient No. 1 at Pyeongtaek St. Mary’s Hospital, spread the disease to more than 50 people when he stayed at Samsung from May 27 to 29. Most of those third-generation patients in the outbreak contracted the disease in Samsung’s emergency room.

“Since the funeral home is in a separate building from the emergency room, you don’t have to worry,” responded the health care center worker.

Altogether, the counselors at the health center receive up to 200 calls a day. They get startling visitors, too.

After a four-hour examination, they found no symptoms of the disease and the drunk was released.

“Lately there have been a lot of intoxicated individuals calling in to say they have caught MERS and would like to be examined,” said one of the health center workers. “They just won’t hang up. It’s troubling.”

The situation at the Gangnam District Office is similarly intense.

As soon as employees arrive at the office, they are brought up to date on issues related to MERS. Their first priority is checking in with people ordered to quarantine themselves.

“Hello, I’m calling from the district office. Are you at home? Are you exhibiting any symptoms?” a district office employee asked one of the people placed under home quarantine on Wednesday. The person at the other end of the receiver responded but was clearly annoyed. At the end of the call, the worker smiled bashfully.

By Wednesday afternoon, 868 local residents were under orders to quarantine themselves in Gangnam District.

More than half of the 1,400 people who work for the Gangnam District Office are responsible for checking on quarantined people. Only when such checks are completed can the office do other business.

“I got out at 1 a.m. in the morning and had to show up to work by 7 a.m. I’m more afraid of exhaustion than of MERS,” said one district office employee.

Back at the Gangnam Community Health Center, a woman in her 70s came in and said she recently visited the Samsung Medical Center.

“I’m so anxious, please give me a medical examination,” she said with obvious agitation. By the end of the day, 70 more people visited the health center and requested examinations.

Later on Wednesday, the district office’s social welfare officers left to purchase basic necessities for those quarantined. They stacked around 400 boxes of rice, ramen, drinking water and hand sanitizer into the back of a truck to be delivered by the next day.

Meanwhile, workers at the health center continued to field calls from people with complaints.

“The hospital is asking us to pay for MERS examination fees,” said one woman who said she was the guardian of someone placed under quarantine. She threatened to “wander around without masks on” if the health center didn’t take care of the hospital bills.

At 8 p.m., closing time for the health center clinic, it was time for to rotate shifts. Just as the night shift workers returned, the phone rang again.

“This is the community health center. Are you exhibiting a fever?”