MERS may be spreading in new way

MERS may be spreading in new way 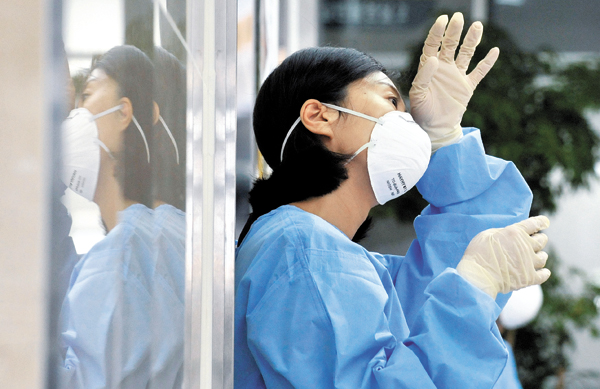 An exhausted doctor waits at the Daecheong Hospital in Daejeon on Friday. As the city battles the outbreak, the military sent 24 Army doctors and nurses to support the hospital. It was the first mobilization of military medical officers for the MERS outbreak. By Kim Sung-tae

Korean health authorities suggested the Middle East respiratory syndrome (MERS) outbreak may have met a new milestone after a patient was described as the country’s first fourth-generation transmission of the fatal respiratory disease.

But the facts in the case were not entirely clear.

The patient, a 35-year-old seemingly healthy policeman who is now patient No. 119, is in serious condition with collapsed lungs.

Four new patients announced Friday brought the total to 126 as of Friday.

One additional death Friday brought the death toll of MERS to 11.

The Ministry of Health and Welfare said on Friday that the 35-year-old policeman in Pyeongtaek, Gyeonggi, is believed to have had contact with Patient No. 52 at the Good Samaritan Bagae Hospital in Pyeongtaek on May 31, although the government is still working on exactly when and where they had contact.

“We have acquired medical records and CCTV footage from the hospital, but only one security camera is set up at the entrance,” said an official of the ministry. “Those records indicate Patient No. 52 came after Patient No. 119 left the hospital, so we are looking into how long they stayed at the hospital and so on.”

If the policeman is found to have contracted the disease from Patient No. 52, he could be the first reported case of a fourth-generation MERS infection. Patient No. 52, a 54-year-old woman, is now considered a third-generation patient.

Pyeongtaek St. Mary’s Hospital is where Patient No. 1 stayed between May 15 and 17, spreading the disease to 36 others, before he was correctly diagnosed with MERS at Samsung Medical Center in Seoul on May 20. Patient No. 1 brought the virus from the Middle East where he spent nearly a month before coming back to Korea on May 4.

If Patient No. 119 is confirmed as the country’s first fourth-generation MERS infection case, the quarantine of people he may have exposed is expected to be extended another two weeks.

Also on Friday, an 8-year-old boy was described as a possible fourth-generation patient, and authorities said he appeared to have been infected by his father while he was quarantined at home. His 49-year-old father is believed to have had exposure to Patient No. 14 and was in self-quarantine at home in Seongnam City.

But later Friday, authorities admitted that the child had accompanied his father to Samsung Medical Center, where he could have been infected, making him third generation.

He was not officially confirmed and is not included in the new cases. But he is the first child to contract MERS.

“After the child’s father was confirmed to have MERS on Tuesday morning, we conducted an initial test [on the child],” a city official said. “At the time, the child tested negative. But on the second test, conducted Friday, he tested positive.”

The four new patients confirmed Friday were infected by Patient No. 14 at Samsung Medical Center in Gangnam District, southern Seoul, and Pyeongtaek Good Morning Hospital. The number of new cases was considerably lower than Thursday’s 14, Wednesday’s 13 and eight on Tuesday.

The fatality on Friday was Patient No. 51, a 72-year old woman. After being treated at Pyeongtaek St. Mary’s Hospital from May 12 to 21, she returned to her home in Sunchang, North Jeolla, where she was supposed to isolate herself.

The village she stayed in Sunchang was completely sealed off from outsiders when she was confirmed for MERS on June 6.

The Health Ministry also provided a list of 87 “safe hospitals” Friday where patients with respiratory symptoms are completely separated from other patients.

The continuing spread of the virus in Korea is alarming more outside countries.

The U.S. Centers for Disease Control and Prevention advised doctors to pay attention to possible MERS infection coming to the United States, reminding them to ask respiratory disease patients whether they have recently traveled to South Korea.

Hong Kong’s health authority also announced Friday that it held 43 passengers on flights from South Korea and another three from the United Arab Emirates on Wednesday after they exhibited MERS symptoms.

It added that 45 of them tested negative, and did not specify the condition of the remaining passenger.

The government launched a MERS hotline for foreigners on Friday, which was urged by embassies in Seoul.

“We will provide real-time information for foreigners with an exclusive hotline from today,” acting Prime Minister and Finance Minister Choi Kyung-hwan said on Friday at a luncheon with officials of foreign companies and embassies.

Meanwhile, education authorities were considering opening up schools that closed in fear of MERS, at least before news of the first transmission to a child came Friday afternoon.

“We need to make important decisions over the weekend because it is very difficult to adjust school days if we close schools for more than 15 days,” said Education Minister Hwang Woo-yea on Friday. Hwang mentioned that the increase in MERS cases is slowing, that the Health Ministry accepted the World Health Organization’s advice to reopen schools.

As of Friday, 2,903 schools canceled classes or temporarily closed.