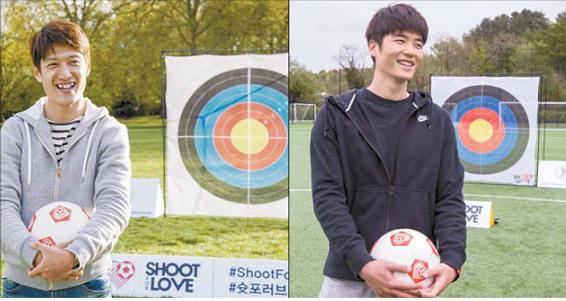 Last year, the “ice bucket challenge,” in which people dumped buckets of ice water on their heads to raise awareness of Lou Gehrig’s Disease, became a global phenomenon.

Now, another charity event is doing the rounds - this time with a sports theme.

The “Shoot For Love” campaign asks participants to try to hit a 2.1-meter-diameter archery target from 11 meters away.

The participant - called “Robin Hood” - can shoot 10 times and will be given a different score each time depending on which part of the target he or she hits. The center is worth 10 points, for example. The amount of money donated will depend on the score achieved.

After completing the activity, the participant can nominate two to four people to take up the challenge.

Social enterprise Be Kind started the campaign last May. The company, which promotes a culture of fundraising, was founded in 2012 by CEO Kim Dong-jun and his friend Choi Jun-woo.

“The No. 1 cause of death in children is accidents, and No. 2 is cancer,” said Kim. “Although you can’t do really much about accidents, I thought we could work on reducing the death of children from cancer. I want to give child cancer patients hope through football.”

The campaign had a different format when it first started. The organizers set up a small football field in downtown Seoul, and whenever a participant scored a penalty kick, 5,000 won was donated to help beat child cancer.

But in order to promote the campaign all over the world, the organizers recently changed the format to combine football and archery.

The 2002 FIFA World Cup hero Ahn Jung-hwan was the first to take up the challenge and scored 54 points. His former national teammate Song Chong-gug, who retired in 2012, scored 83 points, the highest yet in the contest. Swansea City midfielder Ki Sung-yueng achieved 75 points.

Song then nominated Sangju Sangmu military players Lee Jeong-hyeop and Lee Yong, as well as Portugal football icon Luis Figo, whom he defended against in the 2002 FIFA World Cup.

Footballers based overseas, such as Lee Chung-yong of Crystal Palace, Kim Jin-su of Hoffenheim and Yoon Suk-young of Queens Park Rangers have all taken part in the campaign.

The organizers present a T-shirt printed with the number 31 as a gift to participants in order to raise awareness that one child dies from cancer every three minutes in the world.

They said “Shoot for Love” participants don’t donate money from their own pockets because sponsors such as the game company PlayDog Soft and the Guus Hiddink Foundation donate to the Korean Association for Children with Leukemia and Cancer on their behalf.

Kim has been in Europe in order to ask Figo, the former FC Barcelona, Real Madrid and Inter Milan player, to join the campaign.

“Our first goal is to raise 100 million won through the ‘Shoot for Love’ campaign,” he said.