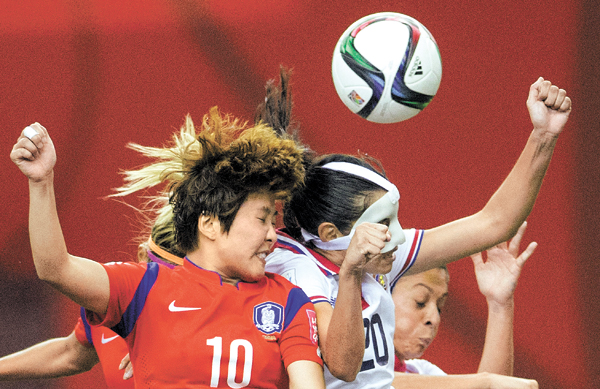 Korea’s Ji So-yun, left, vies for the ball against Costa Rica’s Wendy Acosta during the FIFA Women’s World Cup match between the countries on Sunday (Korean time) in Montreal, Canada. The game ended in a 2-2 draw. [AP/NEWSIS]

In the last minute, Korea missed out on achieving its first victory at the FIFA Women’s World Cup on Sunday (Korean time), with a late goal from Costa Rica ending the team’s second Group E match in Canada in a 2-2 draw.

At the Olympic Stadium in Montreal, Korea, ranked 18th internationally, was eager to make history against world No. 37 Costa Rica by collecting its first win at the quadrennial event and rebounding from its 0-2 loss against Brazil last Wednesday.

Thanks to goals from Ji So-yun and Jeon Ga-eul, Korea led against Costa Rica 2-1 until the 89th minute, but Karla Villalobos’s successful shot blocked the Taegeuk Ladies’ historical moment.

Villalobos came on the pitch as a substitute 76 minutes into the match. 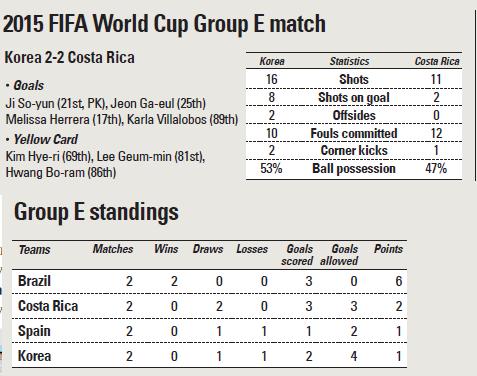 On a positive note, the game resulted in Korea collecting its first-ever point in its second appearance at the FIFA Women’s World Cup.

In 2003, the women’s team lost all three matches in its group qualifiers, scoring just one goal while allowing 11.

Korea is now last in Group E, trailing behind Spain on goal difference, while Costa Rica, which held Spain to a 1-1 draw last Wednesday, is No. 2 with two points. Brazil is the group leader after defeating Spain, 1-0, earlier on Sunday.

Korea will have a do-or-die match against world No. 14 Spain on Thursday in Ottawa and must collect a victory against the European nation in order to reach the Round of 16.

For the team’s first ever encounter with Costa Rica, coach Yoon Duk-yeo changed just one member from the starting lineup of the tourney’s first match, switching centerback Kim Do-yeon to Hwang Bo-ram. However, the defense again showed problems as it failed to catch Costa Rican players penetrating from behind.

While Korea led the attack with earlier shots, Costa Rica was up on the board first in the 17th minute when Melissa Herrera took a loose pass from midfield that bounced into the box and volleyed it past goalkeeper Kim Jung-mi. Hwang cleared the ball out of the net, but it had already crossed the goal line.

However, Korea equalized with the Central American country just four minutes later when Cristin Granados tripped You Young-A in the Costa Rican box and earned a penalty.

Ji So-yun, Korea’s all-time leading scorer, converted it in the right corner to score the country’s first goal in the tournament.

Costa Rica tried to fight back in the start of the second half, but Korea defended its lead with attacking midfielders Jung Seol-bin and Lee Geum-min. Both sides had many chances to score, with the best coming from Costa Rica’s Lixy Rodriguez, whose long-range shot hit the cross bar in the 73rd minute.

But in the 89th minute, Korea failed to stop Villalobos, who ran behind the defense and converted a long pass to score the equalizer.

“We attacked more aggressively even if we were leading,” coach Yoon Duk-yeo said. “We should have pressured the opponent more from the midfield, but we couldn’t.”

Yoon said getting a single point in the tournament means a lot to the team but added that it is still disappointing that they couldn’t get a win. He urged the players to put all they have into their final group match against Spain, while pointing out that Spain’s forward Natalia Pablos and Veronica Boquete are key players to defend.

“It feels like we lost because the team surrendered the goal at the end, but we had a draw,” he said. “As everything gets determined in the final match, we will try our best effort to get a good result.”

If Korea wins against Spain and Brazil collects a victory or draw against Costa Rica in its final match, Korea can advance to the next round with one win, one draw and one loss.