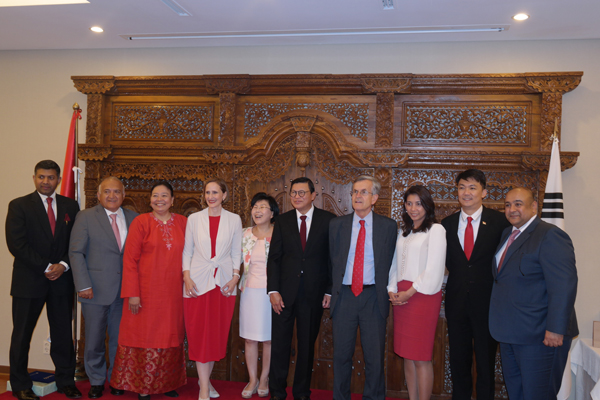 Some 60 diplomats and cultural, economic, media and government leaders gathered for a taste of Indonesian cuisine, participated in quiz on Korean and shared their musical talents in a cultural appreciation program organized by the Corea Image Communication Institute (CICI) on Tuesday.

The event, hosted at the residence of the Indonesian Ambassador to Korea John A. Prasetio in Yeouido, western Seoul, marked the graduation of the 19th session of CICI’s CQ, or Cultural Quotient, program.

It also served as an opportunity to honor key contributing members, such as Austrian Ambassador Elisabeth Bertagnoli, who was presented the Culture Award, and Turkish Ambassador Arslan Hakan Okcal, who received the Cooperation Award.

“We love classical music, and I think this is a similarity we share with Korea,” Bertagnoli said while accepting the prize. “We have so many Korean students in Austria, in Saltzberg and also in Vienna, studying classical music from Mozart, Schubert. The Koreans are so talented and make so much effort. The combination of talent and effort produces great musicians.”

Ambassador Prasetio and his wife, Alexandra Prasetio, were presented with the Special Contribution Award. A grand prize was given to Bill Miner, country chairman of Chevron, and his wife, Lissa Miner.

The group also introduced the new 20th CQ Program, which will run in the latter part of the year, welcoming new members such as Singaporean Ambassador Wei Kiat Yip and the Indian Ambassador Vikram Doraiswami, who arrived in Seoul last month.

CICI is a nonprofit that aims to promote Korean culture overseas. It was founded by Choi Jung-wha and her husband, Didier Beltoise, the CEO and president of consulting firm Cs, to offer customized tourism information for foreign visitors, particularly influential figures.

“Each year, we hold two CQ sessions, and this marks 10 years since we started this program,” said Choi. “There are members who have stayed with our program for all those 10 years, and there are those who are influenced by their experiences, and in a sense become honorary ambassadors to Korea when they return to their own countries.”

Ambassador Prasetio said hosting the event at his residence gave him the opportunity to “provide a friendly environment” for making acquaintances in Korea.