College puts spouses of envoys at the lecterns

College puts spouses of envoys at the lecterns 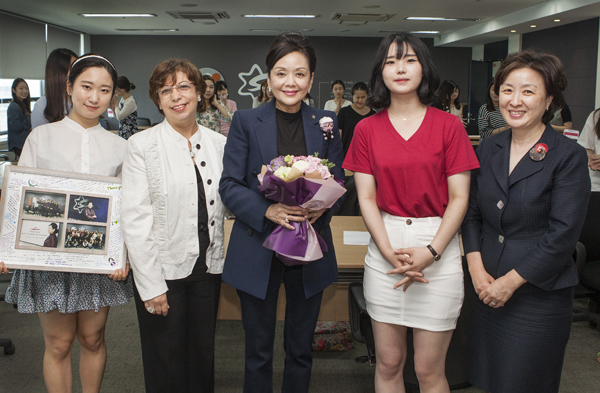 A senior in Chinese language and literature, Kim Ji-yoon recalls her shallow knowledge of Egypt at the beginning of this semester. She spent four years studying the language and culture of one of the four major cradles of civilization, the Yellow River, but barely knew anything about the country that finds its roots in the Nile.

“’The Mummy’ series was my only reference to Egypt,” said Kim, who attends Sookmyung Women’s University (SWU). “A land with pyramids was my rough idea of the Arab country.”

When Kim heard that a course providing a general understanding of Egypt and Indonesia will be offered on her campus in Yongsan District, central Seoul, she was intrigued about an opportunity to broaden her perspective beyond Northeast Asia.

And the key appeal of the course, she says, was the lecturers.

“Learning directly from the wives of the Egyptian and Indonesian ambassadors,” said Kim, “I thought their introduction of their countries’ cultures would be more accurate and informative.”

Twice every year since 2013, the Global Leadership, Global Networking course at SWU has invited ambassadors’ spouses in Korea to teach some 40 female students about their native countries.

Turkey and Australia will take the podium next semester.

“You look around and see that people generally aren’t aware of how privileged they are,” said Chang Yun-keum, the director of SWU’s Institute of Leadership and General Education and founder of the course.

“Young women in Africa cross mountains to fetch water, while poverty-stricken children in Southeast Asia leave school to make money to support their family. For them, education is nowhere on the list of options.”

Heeding the university’s motto “Gentle power to change the world,” Chang wanted her students to embrace a sense of global citizenship and broaden their perspectives. Her idea was to invite ambassadors’ spouses from countries that were unfamiliar to Koreans once a week for a 50 minute-lecture run in English.

“People asked me: Why ambassadors’ wives? Do you honestly think they’d come and teach local students?” Chang laughed as she recalled the skepticism she faced when establishing the course.

The thought that they were eloquent and compelling diplomats, just like their husbands, was the overriding reason she was convinced to invite them to one of the country’s oldest women’s universities.

“They’re flawlessly well-prepared and professional,” said Chang. “Some of our former guests were school teachers, doctors or businesswomen. And because they intertwine those experiences into their classes, [the lessons become way more fruitful].”

Throughout five lectures she was allotted this semester, Nehal Selim, wife of the Egyptian Ambassador to Korea, Hany Selim, was determined to show local students that there was more to her native country than the pyramids and deserts.

Her syllabus ranged from Egypt’s ancient history, cuisine and fashion to the job market, social welfare system and advancement of female leadership.

“My parents were professors, but I’d have to say it wasn’t easy collecting sources for the classes,” said Selim. “In a way, it enriched my own knowledge about my country because I constantly had to study.”

Alexandra M. Prasetio, wife of the Indonesian Ambassador to Korea, John A. Prasetio, said her ongoing career as the owner of an architectural design company in Indonesia helped her infuse a sense of business leadership in her courses, which also introduced the geography, food culture, ancient art and roles of women.

“My initial goal was to inspire them, to tell them that women have so many choices in life than before,” said Prasetio. “I tried to get them to know about the outer world, including Indonesia.”

And seeing her students yearn to travel to her native country, Prasetio said she felt her goal was fulfilled.

Yoon Bit-na, a senior in English language and literature, said she was lucky to have enrolled in one of the school’s five most popular non-major elective courses this year, after failing last semester.

“I was eager to sign up for this course because I thought the very idea of meeting ambassadors’ spouses was unconventional,” Yoon said.