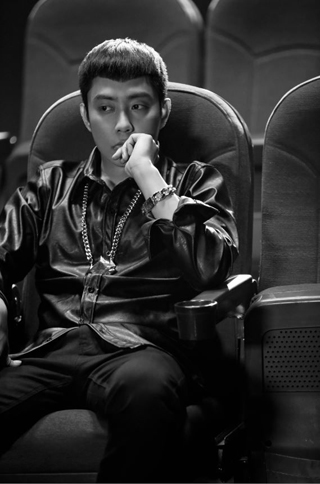 Rapper Eun Ji-won wants to be remembered as a musician instead of an entertainer and wants to contribute to making the public aware of diverse hip-hop genres. [Ilgan Sports]

“Trauma” is singer-entertainer Eun Ji-won’s newest single, which was released on Monday.

Since his debut as the leader of now-defunct boy group Sechs Kies in 1997, Eun has been active in various career paths, from a rapper to an actor to an entertainer.

But though he has been enjoying great popularity over the last few years as a TV host, the 37-year-old feared that if he didn’t bring out a new album, he would be forgotten as a singer. With a determination to be remembered as a musician, he unveiled a new single two and a half years since his last.

A.I didn’t want to intentionally make my music fit into the trends of today. Following the trend is what junior singers are good at. Since my generation and today’s generation grew up listening to different music, I believe the music we like are different. Of course, making the public love my music is important to me, too, as I’m a pop musician. Based on these thoughts, I wanted to find a middle ground between trendy music and my own music style.

Why did you concentrate on singing instead of rapping in “Trauma”?

It is a song for my fans, many of whom want to listen to my singing voice as much as my rapping. Since “Trauma” mostly revolves around a melody instead of a rap, I thought about featuring another singer. However, I felt that I should add more of my own voice into the song.

Some fans may have expected you to rap more.

I actually wanted to see people’s response to my song. I wanted to find out whether one of the old genres, G-funk [a subgenre of hip-hop], still sounds attractive to public. In fact, I wanted to introduce my style of music to the public through this single before revealing a regular album that will become available in September.

As an experienced celebrity, how do you handle criticism?

I heard from someone that many people who post negative comments on the Internet are comparatively old. What can I say to seniors? I can’t even read all the positive comments from my fans, so I don’t try to look up criticism that is directed at me. Also, I guess criticizing others is one of the ways for them to relieve their stress, so I try not to care much about what they say.

How do you think the music industry has changed since you were a member of Sechs Kies?

I feel that boy band singers from my generation were test subjects for today’s boy groups. In our time, there was no Internet, not to mention social media. Since the entertainment system was weak, mistakes were often covered up. These days, however, every small mistake or fault is revealed to the public, making fans become reporters and evaluators. I guess this led many junior singers to become robots who can do everything from singing to dancing to acting. Even though the singers of our generation were not as good as those of current generation, many fans in the past liked us just for seeing us.

Do you think you will ever get involved in politics?

I’ve realized there is nothing good about revealing one’s political color, especially if that person is a celebrity. If I had in-depth knowledge and firm opinions about politics, it might have been OK for me to reveal my leanings. However, that’s not the case for me. Since I don’t know much about the field, I don’t want to say anything about it. In fact, some celebrities who are not reluctant about publicizing their political opinions are the ones who wish to enter into politics.

What do you think is your biggest achievement in music?

It is very difficult for singers to have their songs enter the music charts and to be aired on music programs (laughs). My music is not trendy, and I don’t want to make it that way. Regardless of the number of people who listen to my music, it is a huge accomplishment for me if the number increases.

I also want to have a firm position in hip-hop. For example, in terms of foreign musicians, the first person that comes into our mind when we think of Southern hip-hop is the American hip-hop musician Flo Rida and the Black Eyed Peas for electronic hip-hop. However, there are no similar Korean hip-hop musicians. I want to show the public that there exist diverse genres within hip-hop.

How do you feel about leading the life of a celebrity for almost 20 years?

Even though I often appear in TV, I lead a life just like an ordinary person. In the past, I used to wear a mask and sunglasses even when I went out for a short time. These days, however, I’m not reluctant to go out even while wearing a tracksuit. It took me quite a long time to get as comfortable as I am now, but I feel like it’s better this way. Also, I used to feel very nervous in front of the camera in the past, but that’s all gone now.

What do you think about hip-hop survival audition programs such as “Show Me the Money” and its spin-off “Unpretty Rapstar?”

They have definitely played big roles in making hip-hop become more widely known to the public. I feel great about such an achievement because it has become one of the mainstream genres in the music industry. But I can’t stop thinking that hip-hop songs have all become similar after those programs aired.

For example, every hip-hop track these days is a song with a trap beat, as if that represents general hip-hop. Diverse genres of hip-hop music exist, but I’m afraid that the specific genre sang by the winner of an audition program may be viewed as the best in the hip-hop genre.