Irish-born Van Morrison given a knighthood

Irish-born Van Morrison given a knighthood 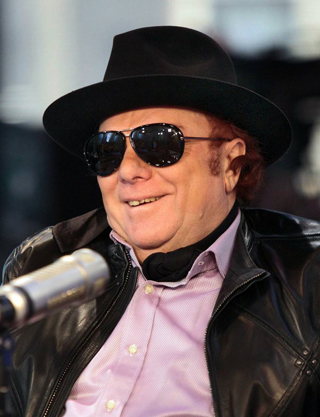 The Belfast-born singer and songwriter Van Morrison was honored Friday by Queen Elizabeth II for his services to music and tourism in Northern Ireland, the inspiration for many of his classics. [AP/NEWSIS]

LONDON - Acclaimed singer and songwriter Van Morrison is joining a select group of music giants with a knighthood to their name.

The Belfast-born Morrison was honored Friday by Queen Elizabeth II for his services to music and tourism in Northern Ireland, the inspiration for many of his classics. Many of his wistful, mystical songs are set on the streets of Belfast.

The musician, known for hits such as “Brown-Eyed Girl’’ and his unique take on American roots music, will join Sir Elton (John), Sir Paul (McCartney), Sir Mick (Jagger) and several others in the British pantheon.

Morrison is among more than 1,000 people recognized by the queen in her annual Birthday Honors list for their achievements and services to the community.

Recipients in entertainment include Academy Award Best Actor winner Eddie Redmayne, who was named an Officer of the Order of the British Empire, or OBE. Redmayne has enjoyed a stellar year with a slew of awards for his portrayal of physicist Stephen Hawking in “The Theory of Everything.’’

“Sherlock’’ actor Benedict Cumberbatch and “Twelve Years A Slave’’ actor Chiwetel Ejiofor were both named Commander of the Order of the British Empire, or CBE.

Kevin Spacey, who is finishing a 10-year run as artistic director at London’s Old Vic theater, was awarded an honorary knighthood for his services to culture and British theater.

Spacey said he was “honored and humbled’’ by the monarch’s recognition and thanked Britons for supporting his work. “I feel like an adopted son,’’ he said.

Others honored included people from a wide range of professions, from sports players to historians, women’s rights campaigners and health workers. They include Will Pooley, the first British person to contract the Ebola virus, who was honored for his services in tackling the outbreak in Africa.

Almost three-quarters of the list of 1,163 recipients is made up of those away from the public eye who are honored for their work in local communities.

Knights are addressed as “sir’’ or “dame.’’ Recipients of the other honors have no title, but can put the letters after their names. The ranks for the Orders of the British Empire are Commander, Officer and Member, in descending order.