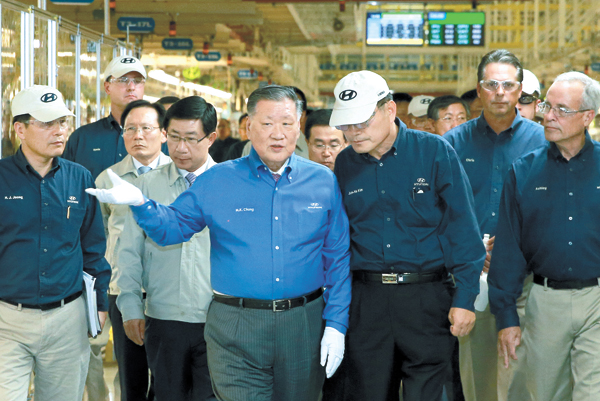 Many Korean conglomerates like Samsung and LG operate under the strong leadership of the group chairpersons and presidents known as chaebol, or royal family members, and that model is most apparent in Hyundai Motor Group, which runs the nation’s two auto giants - Hyundai Motor and Kia Motors - and many other companies in the steel, construction and finance sectors.

Hyundai Motor was established within the Hyundai Group by founder Chung Ju-yung, but after going through a leadership succession in the early 2000s, the automaker was separated along with nine other affiliates and operates as a completely separate company from Hyundai Group.

Hyundai Motor Group employees say they are a young conglomerate born in 2000 and want to keep distance from Hyundai Group, which is managed by Chairwoman Hyun Jung-eun, widow of the Hyundai founder’s third son, Chung Mong-hun, who committed suicide in 2003 while being investigated by prosecutors on suspicion of creating slush funds.

“Still, many Koreans remember the Hyundai Group established by founder Chung when they think about the company’s vision and management philosophy, but we’re a completely different company,” said a Hyundai Motor spokesperson. “It is true that we succeeded under the great founder’s basic management philosophy that emphasizes the spirit of challenge, but more new ideas like creative thinking have been added since Hyundai Motor Group was formed.”

No matter what employees of Hyundai Motor Group think, the company is still considered to be an organization that operates based on what the chairman says, like soldiers take orders, thanks to founder Chung, who is often recalled with the phrase “the legend of bare hands” after starting as a daily worker at a construction site and establishing the country’s No. 2 company, Hyundai Motor, and No. 22 Hyundai Group, along with many affiliates.

In the early 1970s, when Chung Ju-yung visited several banks abroad to attract investments to build a shipyard in Ulsan, most foreigners laughed at the plan. Even his colleagues opposed the plan, though it had been ordered by military strongman and President Park Chung Hee, father of President Park Geun-hye.

But Chung did not give up easily and arranged a meeting with A&P Appledore Chairman Charles Longbottom after waiting seven days for him to receive a recommendation letter and a shipyard building plan, documents that U.K. bank Barclays required for approval of a loan. Longbottom rejected the loan several times, as he thought neither the Korean government nor Hyundai would be able to pay back the money.

But Chung showed him a 500 won ($0.45) note with a picture of turtle ships, the battleships built by Joseon Dynasty war hero Admiral Yi Sun-sin. Chung then displayed an aerial photo of Mipo Bay showing nothing but sand and persuaded Longbottom by saying, “This battleship was built in 1592, and it means Korea has a longer history of shipbuilding than the U.K., which I heard started in the 1800s.”

Longbottom did not believe Hyundai could be competitive, but Chung’s argument was enough to persuade him to help Chung attract a $40 million investment at a time when the average annual per capita GDP in Korea was $100.

When a job portal site conducted a survey of college graduates in May to ask about their image of Korean conglomerates, Hyundai Motor was described as a military style culture where it only takes a minute to put the order of the owner into action and emphasizes “brotherhood” to accomplish the goals of the organization.

Such camaraderie and strong leadership have been the keys to the success of Hyundai Motor Group under Chairman Chung Mong-koo.

In 1998, Hyundai Motor took over bankrupt Kia Motors by acquiring a 51 percent stake in the company. Industry insiders at the time worried that Kia could drag down Hyundai Motor and that it would take at least five years for Kia to normalize its operations. But Chung believed Kia Motors had huge growth potential and stabilized the company in only a year by allowing Kia to share body platforms, research and development and more advanced technologies used by Hyundai Motor.

Chung Mong-koo also showed sharp insight into the business. In 2011, dealerships and branches in the United States asked Chung to build an additional U.S. plant to meet increasing demand as Japanese automakers Toyota and Honda struggled to meet demand for vehicles in the wake of the tsunami. But Chung said it was not the right time to build another plant, and in the second quarter of the year, U.S. credit ratings were lowered, the Eurozone crisis grew and demand for new cars shrank.

In his 2012 New Year’s speech, Chung declared the company would focus on ensuring internal stability as the growth of the auto industry was expected to be slow with more intense competition.

Nonetheless, Chung carried out a series of aggressive expansion initiatives in Europe.

“We need to find solutions to overcome the shrinkage of the global auto industry in Europe, the origin of the trend,” he said at the time.

He then ordered an improvement in overall product quality and the development of new cars only for the European market.

Such efforts soon generated positive results. According to a European Automobile Manufacturers Association report, automobile demand in 2012 dropped by 7.8 percent in Europe from a year earlier, but combined sales by Hyundai Motor and Kia Motors increased 11.6 percent and their market share in Europe increased from 5.1 to 6.1 percent as sales of GM, Toyota, Volkswagen and other automakers declined.

But Chung most resembles his father in the way he manages employees, popularly know as “rugby ball style.” Most Korean conglomerates carry out a restructuring of executives regularly, typically twice a year, but Chung prefers a more impromptu style to maintain a level of tension among executives who manage key businesses in the group.

“The personnel management style of Chung is very different from Lee Kun-hee, the ailing chairman of Samsung Group,” said an analyst at NH Investment & Securities. “But looking into the culture of Hyundai’s organization, the impromptu style has worked well, as it boosted competition among employees more than it created anxiety.”

Hyundai Motor Group organizes an orientation after it hires college graduates, which is their first chance to meet the chairman. Every time he met rookies in the orientation, Chung encouraged them to find out what the company expects and the direction it is heading to become the kind of employee the company needs.

Chung did not hesitate to change leadership whenever the company got into trouble. When Hyundai Motor and Kia Motors came under fire for misstating the fuel efficiency of its vehicles in the United States in 2012, Chung went to the country and fired key aides, including Hyundai WIA President Lim Heung-soo. He also terminated Kwon Mun-sik, who was in charge of the research and development department, when the company was dealing with product quality issues and recalls in the United States and Korea.

“The inside culture of a company develops like the personality of a human, meaning it can depend on what kind of industry the company was born in and what kind of character the leader tried to put into the company,” said Park Hyung-chul, CEO of Mercer Korea, a personnel management consulting firm. “What the leaders of Hyundai tried to plant within the organization are loyalty to the company and a spirt of challenge.”

-Others: Seven companies, including Hyundai Glovis and Haevichi Hotel & Resort

-September 2000: Ten companies, including Hyundai Motor and Kia Motors led by Chairman Chung Mong-koo, were separated from Hyundai Group upon approval by the Fair Trade Commission.