Vice chairman makes a name for himself

Vice chairman makes a name for himself 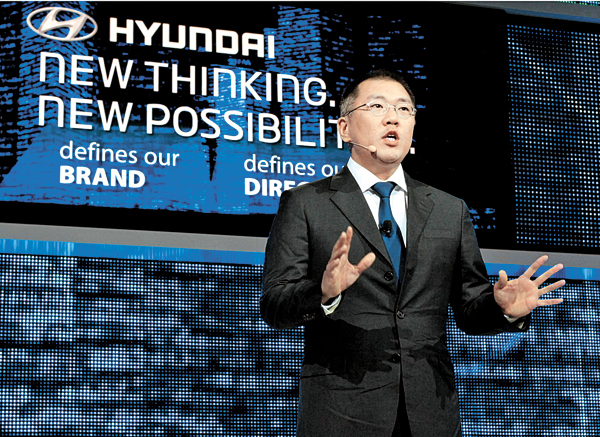 Hyundai Motor Vice Chairman Chung Eui-sun joined the company as the executive in charge of managing materials that supply necessary equipment in car manufacturing, the most basic part of business.

The company said it is a tradition that owner family members like the son of Hyundai Motor Group Chairman Chung Mong-koo begin their careers at the division.

Chung is known as the grandson who was most beloved by Hyundai Group founder Chung Ju-yung.

“People in the company often recall images of the founder when they see the vice chairman,” said a Hyundai Motor spokesperson. “He is a kind man, but in business, he looks very similar to his grandfather, who enjoyed a challenge and had a strong drive when carrying a plan into action.”

Chung also is known to enjoy drinking soju and makgeoli with production workers, instead of expensive wine or whisky like his grandfather did, and his favorite foods are kimchi stew and naengmyeon (cold noodles).

When Kia Motors was performing poorly in 2005, the 45-year-old announced a new business plan that focused on design when he became president of the affiliate.

Kia’s sales were suffering due to decreasing demand for SUVs and minivans and consumers complained that they did not see much difference between Kia and Hyundai cars.

Chung said design was the key to resolving the problems and brought in Peter Schreyer, a German, as chief design officer of Kia.

Under the leadership of Schreyer, Kia started to develop its own identity by treating design as a priority in manufacturing cars.

The effort brought positive results in June 2008 when the automaker introduced the new Kia look with a facelift edition of the Lotze and Forte sedans and Soul box car.

It then developed a signature grille design known as the “tiger nose” and applied it to the Sorento R and Sportage R SUVs and K5 sedan.

With the upgraded design, the company started to turn around its business, selling an average of 4,900 units of the Sorento R in 2009, about 10 times more than the predecessor model sold in Korea.