This 20th-century folding screen featuring magpies and tigers - animals associated with good omens and miracles - is a product of woodblock printing. The item is one of about 100 on display at the exhibition on woodblock prints at the National Folk Museum of Korea. Provided by the museum

“Woodblock printing is an art of lines. In that sense it has a common thread with contemporary art and computer graphics,” explained Han Seon-hak, the director of the Museum of Ancient Asian Woodblock Prints, with passion in his voice.

Han was speaking to journalists on June 2 at a press preview of an exhibition on woodblock prints. He seemed thrilled to be introducing relics from his museum, which traveled a long distance to be showcased at the National Folk Museum of Korea in Seoul.

As part of its so-called “K-Museums” initiative, the institution is bringing some important relics from public and private museums outside of Seoul to shed light on the venues and their artifacts.

It is also a chance for those in the capital to enjoy precious pieces from faraway museums without having to travel.

The folk museum chose Han’s Museum of Ancient Asian Woodblock Prints as the first beneficiary of the “K-Museums” initiative for a reason.

Its collection of woodblock prints from Korea and other parts of Asia is of high academic and artistic value and provide important clues to the history of woodblock prints, according to Ki Yang, the head of the exhibition division at the National Folk Museum of Korea.

He had his eyes opened to Asian antiques when he visited sacred Buddhist sites in China with his fellow monks in 1996. Today, Han is the leader of Myeongju Temple - a Buddhist place of worship affiliated with the Museum of Ancient Asian Woodblock Prints. 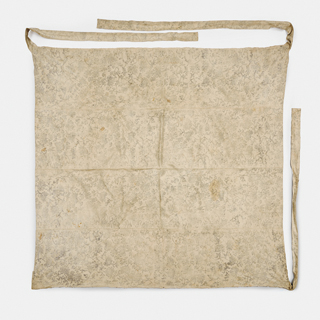 A duvet with a chrysanthemum pattern from the late Joseon Dynasty (1392-1910) is also made with woodblock printing. Provided by the museum

After the trip, he frequented antique stores in Insa-dong, central Seoul, and the items that caught his eye the most were woodblock prints.

“I studied sculpture in college,” he said, explaining that this was one of the reasons he was particularly attracted to woodblock prints.

“Although the turn of events led me to become a Buddhist monk, there was always an aspiration for sculpture within me.”

Han said because woodblock prints could have been produced in large quantities and lack the rarity paintings have, they have largely been underappreciated in Korean history. Nonetheless, he began collecting the woodblocks, thinking that as a monk he should be able to make prints and give them to Buddhist believers.

According to Han, that is how the art emerged in the first place when Buddhist monks carved the faces of Buddha on wood, like a stamp, and distributed the prints to Buddhist believers.

However, Han also emphasized that woodblock printing is more than just Buddhist art.

He said prints were used to disseminate knowledge and information, the doctrines of Confucianism for instance, which is what the first section of the ongoing exhibition at the National Folk Museum of Korea is all about. 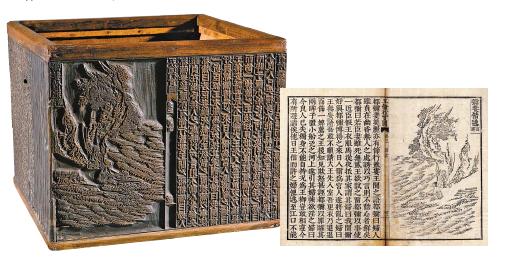 One of the highlights of the exhibition is the 1797 woodblock prints for the five Confucian teachings known as Ohryun Haengsildo. The planks, during the 1910-45 Japanese colonization of Korea, were made into a brazier. It was kept that way to remember history as it happened. Provided by the museum

Despite being the only relic in existence in Korea that features the five doctrines, or Ohryun Haengsildo, the wooden planks were turned into a brazier by Japan during its 1910-45 colonization of Korea.

As it is cube-shaped with an open top, there are four planks. But it is not known where the rest are.

“The Ohryun Haengsildo book, published during King Jeongjo [1752-1800] had thousands of pages, so there should also be that many planks. It’s a mystery how only four remain today,” Han said.

In the second section, the organizers present relics that embody people’s wishes. This is where the Buddhist art aspect of woodblock prints is most conspicuous.

Because the wooden planks almost always had carvings in the front and the back, they are displayed in a way that visitors can enjoy both sides.

The last section of the exhibition, meanwhile, tries to show that woodblock prints had colors and were used in daily items and popular art such as folding screens, book covers and even blankets.

“When people think of woodblock printings, they usually think of it as black-and-white art,” Han said.

“But there are woodblock prints with colors.”


“The Flowering of Print Culture: Ancient Woodblock Printing” runs until July 20 at the National Folk Museum of Korea.