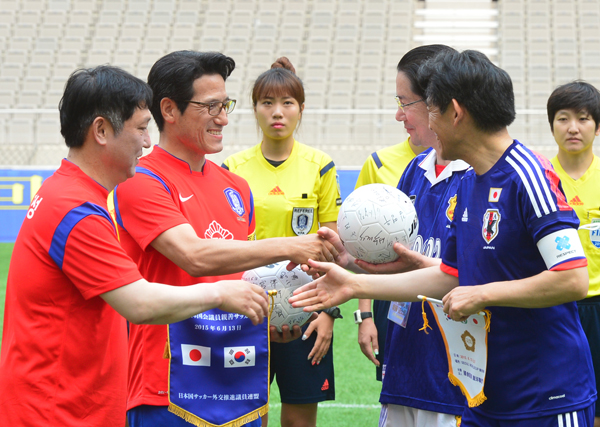 Korean and Japanese lawmakers exchange souvenirs after a friendly match held in Mapo District, northwestern Seoul, on Saturday, the first such game in nine years. [NEWSIS]

A friendly football match between Korean and Japanese lawmakers kicked off Saturday in Mapo District, northwestern Seoul, for the first time in nine years amid frosty relations over historical and territorial disputes.

Korea won the match at World Cup Stadium in Sangam-dong with eight goals against four.

“Noting that the friendly match was the first in nine years, I hope this game paves the way to a change in the icy relationship between Korea and Japan,” said Choung Byoung-gug, a Saenuri Party representative who leads the football club between the two countries.

Choung continued that Seishiro Eto, a Japanese politician of the Liberal Democratic Party who led the delegation, suggested a drink of poktanju, a boilermaker of soju and beer, after the game.

“I understood the gesture as: ‘Let’s get it all out of ourselves. It’s time to find a breakthrough in the [soured] relations between Korea and Japan.”

Around 20 lawmakers from Korea played, while 21 participated from Japan. Among those who represented Korea were Kim Young-woo and Cho Hae-jin from the Saenuri Party and Kang Gi-jung and Choi Jae-sung from the main opposition New Politics Alliance for Democracy.

Cho took home the MVP prize for scoring three goals out of the eight.

“This year marks a remarkably significant year [for both countries] because it’s the 50th anniversary of establishing diplomatic ties,” said Saenuri Rep. Kim Moo-sung, who was the goalkeeper in the second-half.

“At a time when tension is high, I hope politicians from both countries gather often to bond like we did in the old days.”

Saenuri Rep. Suh Chung-won expressed his gratitude to his Japanese counterparts for taking the trip to Seoul despite the Middle East respiratory syndrome (MERS) outbreak.

The first football match between Seoul and Tokyo lawmakers was held in 1998. Seven matches were held in total until 2006. Korea has so far won four times, lost twice and tied once.