The following month, two Europeans from Greece and Germany sprayed subway trains in Daegu and Incheon as well as the capital city.

They went back home before Korean law enforcement could do anything.

Korea’s subway systems are proving irresistible to graffiti artists, even the ambitious “whole trainers,” who work in teams to cover an entire train from one end to the other.

While only one case of graffiti vandalism was reported in 2013, 14 were reported last year in the metropolitan area railroads managed by the Korea Railroad Corporation (KORAIL). As of May, eight cases were already found in 2015.

“The cases reported by the media were just the tip of the iceberg,” said a rail official who spoke on condition of anonymity. “Many cases were not even reported to the police.”

Whole train graffiti artists work in teams of three or four, and sometimes additional team members are needed to hold lights or cut through fences.

According to Kim Hyeon-mo, the only officer specializing in graffiti cases at the Seoul Regional Railway Police, seven or eight crews are targeting Korea to use its rail cars as their canvases. 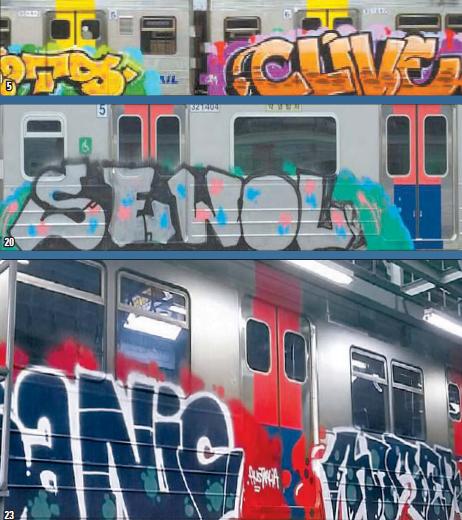 He came to that conclusion after researching on the Internet the names the writers leave on trains, their signatures.

Those foreign graffiti artists do their homework and are clever in their modus operandi. Most of them stay in the country for short periods and 11 graffiti works have been reported at three stations - Wangsimni, Ansan and Geumjeong.

“It’s possible that information about how to break into those stations and how the trains are stored is being shared,” Kim said.

A Korean graffiti artist says Hongdae in western Seoul is where the foreigners converge. They favor spray paint made by Germany’s MontanaCans for its glossiness, and a shop selling that paint is located in the area. According to the local artist, they can find others to form a crew in Hongdae.

The Greek artist was caught purchasing some graffiti products via a CCTV camera in the store.

Last month a graffiti artist from Latvia was actually arrested. For 18 months, he allegedly spray-painted train cars and left his signature, “CRUDE.”

But he did not rat out any of his fellow artists to the police.

“It is a rule in their world,” Kim said, “not to talk about other artists.” 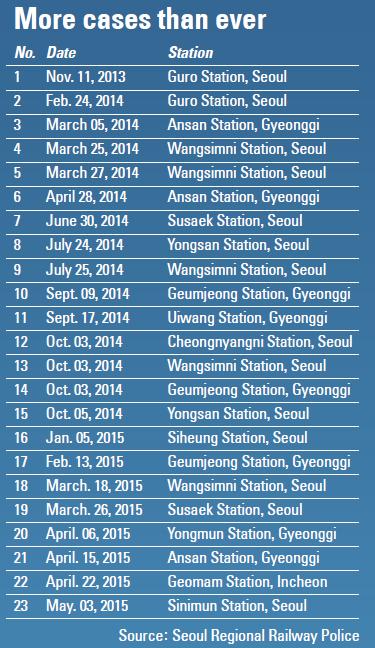 After a court rejected a detention warrant on the Latvian due to lack of evidence, he was released.

Meanwhile, the authorities say some Koreans seem to be getting in on the game.

On April 6, 10 days before the first anniversary for the sinking of the Sewol ferry, a train was sprayed with the word “SEWOL” in Yangpyeong County, Gyeonggi.

On April 15 and 22, attempts to erase graffiti were found at two subway stations in a metropolitan area.

Kim believes an artist was afraid he would be identified by his signature.

On the other hand, domestic graffiti artists say they are not interested in trains because they are allowed to practice their art on the streets of Hongdae and Apgujeong in Seoul.

Under current law, spray-painting graffiti on a subway train is considered vandalism. It is punishable with a maximum three-year prison term or fines up to 7 million won ($6,290).
BY JANG HYEOK-JIN [nam.yoonseo@joongang.co.kr]