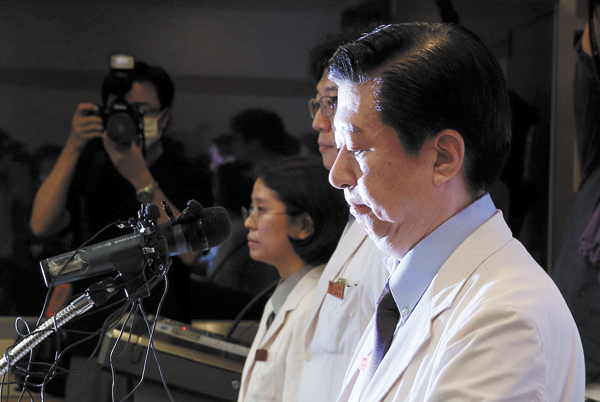 Song Jae-hoon, right, director of Samsung Medical Center in Seoul, announces that one of Korea’s top hospitals will shut down its emergency ward, not take new inpatients and will stop all outpatient treatment in order to fight against MERS infections at a press conference on Sunday. [NEWSIS]

Shaken by the rising number of infections in its wards, Samsung Medical Center partially shut down operations Sunday in a desperate effort to stem the further spread of Middle East respiratory syndrome (MERS).

Sunday’s measures, which will be in effect through June 24 at the least, was recognition that Samsung, one of the country’s largest and best hospitals, did not have proper procedures in place and was by far the largest source of MERS infections. With seven new confirmed cases in Korea reported Sunday, 66 people including two doctors, patients and their relatives have contracted the virus during a visit or stay at Samsung Medical Center in Seoul. Four out of seven reported Sunday were contracted at Samsung.

One patient alone, Patient No. 14, infected at least 60 people at Samsung. He is considered a “super-spreader.”

The total number of patients so far is 145 and there have been 15 deaths. 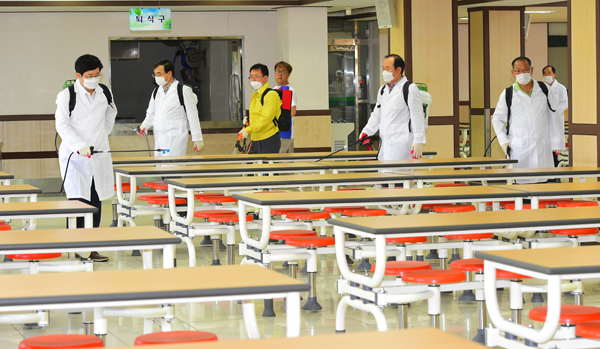 Quarantine workers spray disinfectant inside a school in Suwon, Gyeonggi, on Sunday before many schools in Gyeonggi resume classes today. [NEWSIS]

During a press conference on Sunday, a grim-faced Song Jae-hoon, director of Samsung Medical Center, announced the suspension of non-emergency surgeries and the closure of its emergency ward until June 24. Under the temporary suspension, the hospital will not accept outpatients and restrict the access of relatives to patients.

Song said the hospital decided on the suspension after one of its emergency ward transfer agents tested positive for MERS on Friday and became Patient No. 137. It was also revealed that he worked over a nine-day period from June 2 and June 10 during which he showed signs of infection, a fever, raising further questions about Samsung’s management of its workers and infection controls. The 55-year-old worker contracted the virus from contact with Patient No. 14 from May 27 and 29.

“I bow my head deeply in apology for concerns we have caused to the people regarding Patient No. 137, an emergency ward transfer agent, and over the fact that Samsung Medical Center has become the center of MERS infection,” said Song.

The news that Samsung’s emergency ward worker had continued working until Wednesday and had not even been on a list of potential patients drafted by the hospital showed Samsung was neglecting the most likely people to catch the disease: medical workers. It was an accusation Song accepted during the Sunday briefing.

“We should be held entirely accountable for the poor management of our transfer agent,” said Song. The hospital said it was still trying to find out what led to its failure to detect signs of infection.

“The fact that Samsung now has a MERS patient who was a transfer agent is a very serious matter, which says a lot about its inability to control potential exposures,” said Lee Jae-gap, professor of infectious disease at Hallym University Medical Center.

The professor added the government may have overly trusted Samsung’s ability.

Pointing out that Samsung Medical Center had been excluded from the control of the state-led MERS preventive efforts, Seoul Mayor Park Won-soon called for a special investigation into what led to Samsung’s blunder in regard to Patient No.137.

“Samsung Medical Center’s response to MERS must come up to a new level now,” said the mayor during a press briefing Sunday. “It is time for the government to be on the frontline [in stemming further infections].”

Samsung Group said Sunday it did not plan to move ailing Chairman Lee Kun-hee out of his hospital room on the 20th floor of the medical center, which is a proud part of the Samsung group. Lee has been hospitalized over a year since he suffered acute myocardial infarction in May 2014.

Nineteen new confirmed cases of MERS were reported over the weekend, including a Samsung Medical Center doctor who tested positive on Saturday, three days after entering in-house isolation, becoming Patient No. 138. The 37-year-old doctor treated patients after exposure to Patient No. 14, the super-spreader, on May 27.

The authorities have yet to fully realize whom the infected doctor had been in contact with until his diagnosis Saturday. The doctor started showing symptoms Wednesday, two weeks after contact with Patient No. 14 at Samsung’s emergency ward. He was put in quarantine the same day, according to the government.

“Patient No. 138 was put under in-house quarantine after he began to have a fever on Wednesday,” said Jeong Eun-gyeong, an official at the Korea Centers for Disease Control and Prevention.

Authorities are tracing the 37-year-old’s movements over the two-week period between Oct. 27 - when he came in contact with Patient No. 14 in the emergency ward - and Wednesday. It is also known that he treated patients until Wednesday.

One MERS patient died Sunday, raising the total death toll to 15, a 10.3 percent fatality rate out of 145 confirmed cases. The victim, Patient No. 81, was Busan’s first MERS case, a 62-year-old man who contracted the virus from Patient No. 14 during a visit to a relative at Samsung Medical Center’s emergency ward on May 27. Patient No. 81 was under intensive care at Busan Medical Center from Tuesday but died of pneumonia caused by MERS. Patient No. 81 was said to have no pre-existing illnesses before his infection with MERS, raising fears because many of the previous fatalities had severe underlying illnesses.

On Saturday, a fourth-generation transmission of the disease was reported after an ambulance driver, 70, was diagnosed with MERS a day before.