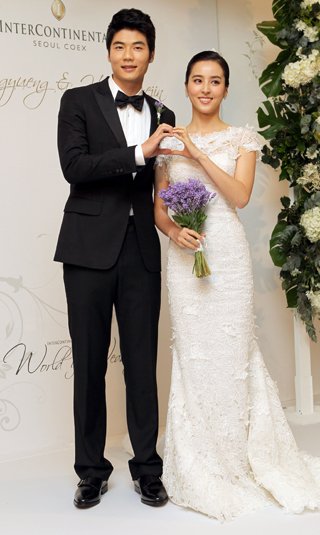 Actress Han Hye-jin, 33, who is married to Korean professional footballer Ki Sung-yeung, 26, will give birth to a baby girl in September, according to a source close to the two on Monday.

Han followed her husband, a midfielder at Swansea City, to the United Kingdom in April, and the two returned to Korea in May.

The actress is planning to remain in Korea after delivering the child to take time for recovery, so Ki will go back to Swansea alone for the time being.

The couple recently modeled for fashion magazine Marie Claire Korea’s July issue. The shoot took place in London in consideration of Han and her pregnancy.

Han and Ki got married in July 2013, which was a great surprise to most people as Han is eight years older than Ki.

After becoming pregnant, the 33-year-old actress donated around 1,000 items for infants such as baby bottles to World Vision through English company Philips Avent, a company that manufactures baby products.

Han has also been working as an honorary ambassador for World Vision since 2008. She even donated 60 million won ($53,900) to the NGO, which was part of the congratulatory money given to the couple by their friends in celebration of their wedding.