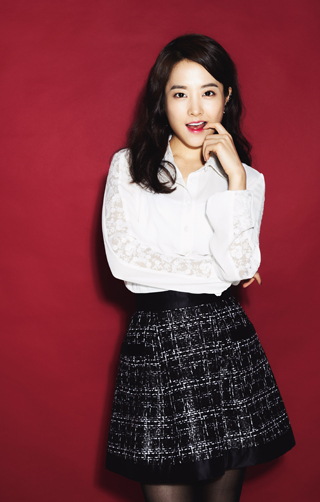 Actress Park Bo-young is playing a student - again - in thriller film “The Silenced” after earning widespread popularity from the 2008 movie “Scandal Makers.”

But instead of taking on a troublesome teen who gets pregnant, she is a fragile student placed at an all-girl’s boarding school in a resort area during the Japanese colonial rule of Korea in 1938.

In a recent interview with the Ilgan Sports, an affiliate of the Korea JoongAng Daily, the 25-year-old actress with 10 years’ experience says she doesn’t mind playing a student in movies if that’s what she can do best.

Q. Why did you choose to do this movie?

A. The fact that the movie set out to depict what happened in the 1930s seemed very special. Also, the lead character, Ju-rin, seemed to have a large spectrum of emotions, so as an actress I really wanted to play her. It was interesting that the character was passive in the beginning due to her weak constitution but became more active toward the end.

Did you like the uniforms and accessories you wore in the movie?

The director really deliberated on the uniform. Much time was invested in choosing the shape of the ribbon, the color, material and shoes.

What was it like to do action scenes using a wire?

There were so many things I needed to prepare. First of all, the most difficult thing was to have the right posture. It was more about making it look real rather than making it look cool.

There was a scene where I had to grab a neck of a Japanese soldier and pick him up. I had to think hard and practice where I needed to put extra pressure on my fingers to make it look like I was really picking him up. I also did an underwater scene for the first time, and I didn’t know it was that much harder to keep your eyes open in the water.

What was it like to shoot with many that are less experienced, rather than senior actors?

I’m in no place to give out advice, but since there were many who didn’t have any on-set filming experience, I was able to share some of the technical things that I learned before. They were watching me act and that really made me feel like I was acting live for the audience. It also made me feel that I needed to do better.

Don’t you want to play other characters rather than young girls?

I felt that way before, but not anymore. I was asked that particular question so many times that I automatically started to debate whether I needed to get out of this young girl image sooner.

But after putting some more time into thinking about it, such a worry doesn’t make me act better at all. I think if I focus on the roles I can do well right now, I should be able to make the transition naturally and do adult roles smoothly.