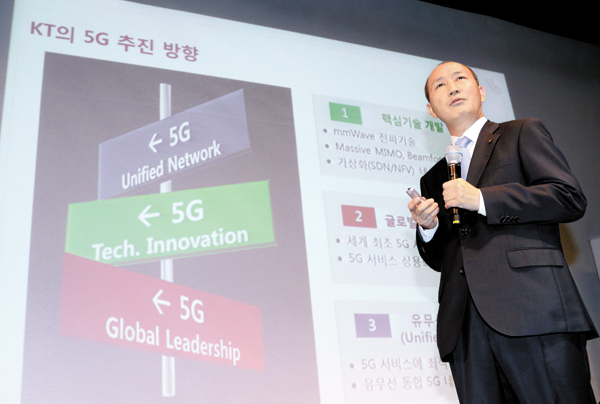 KT will launch an advanced version of the existing 4G LTE network that it claims is 15 times faster than the current speeds, the company said on Monday.

The maximum download speed of the network, as the name indicates, is 1.17 gigabits per second. The company said that in theory it will allow users to download 3 GB, or 100 songs, in 21 seconds or an 18-GB movie in 126 seconds. In practice, however, the speed of the download time could be slower as varying network loading times and signal strength in different regions could hamper it from performing at the maximum rate.

The new network will be offered to a specific clientele base at first, though the company plans to expand the service next year.

Owners of a smartphone from the Galaxy S6 series who are subscribed to KT’s latest data plan that costs above 59,900 won ($53.60) monthly will be able to enjoy the faster network for free.

When asked for the limited access, the company said that specs of the older phones would not be ideal to support the network system.

“There is not many smartphones that are compatible with the Giga LTE,” said Kang Gook-hyun, director of KT.

“Also, the reason why we serve the subscribers in the upper price range is that since the Giga LTE is expected to consume a lot of data, those in the lower range could be charged with hefty extra fees,” he said.

The network is the result of a collaboration with Samsung Electronics. Both companies worked on the data network technology that combines different frequency bands with a Wi-Fi network.

Although there are many services that support multiple fragmented bands, this was the first time for any company at home or abroad to achieve success by merging different band spectrums and Wi-Fi.

Before the launch of the service, KT’s most advanced network was the Broadband 3CA LTE-A that combines three spectrums with 300 megabits per second at maximum speed.

KT stressed that its success in combining multiple bands and a Wi-Fi network will serve as a springboard to advance to the next-generation network technology of 5G. The key difference of 5G connectivity includes reduced latency as well as higher speed.

Latency refers to the time it takes for a package of data to go from one point to another. The lower the latency, the faster the data exchange.

“The Giga LTE will play a crucial role in helping KT get the upper hand in the 5G era,” said Oh Seong-mok, head of network division at KT.

“The technology that was adopted by KT for the first time around the world is a step closer to 5G,” he said.

The telecommunications provider said it will demonstrate a more advanced network technology during the 2018 PyeongChang Winter Olympic Games.

“As a major sponsor of the international sports game, KT will use the event as an opportunity to feature our advanced data technology and wider coverage than other carriers,” said Oh.