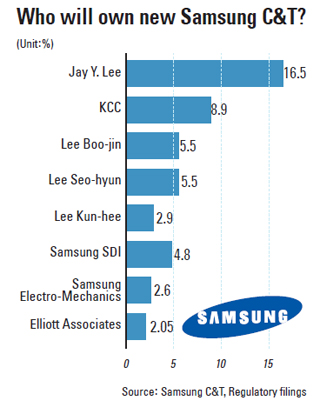 American hedge fund Elliott Associates will begin its legal action against Samsung Group’s owning family this week to fight a merger, posing a major challenge to the conglomerate’s efforts to conduct a generational power shift at the top through a change of ownership structure.

The legal action follows the announcement that each share of the construction company was to be exchanged for 0.35 share of Cheil, a ratio that Elliott says undervalues Samsung C&T.

KCC is considered an ally of Samsung in the fight against Elliott, and that deal prompted the activist hedge fund to file a lawsuit against Samsung C&T last Thursday.

After the move, Samsung C&T delisted its depositary receipts traded on the British stock market in a move to protect itself from a possible lawsuit there by the U.S. hedge fund.

While the legal proceedings draw nearer, a securities company predicted Monday that Samsung could find it hard to receive approval of the merger during a meeting scheduled for July 17.

For the planned merger to be completed, the group needs to win approval from shareholders with two-thirds of the voting rights and a third of outstanding shares.

“Now, the shares seen in favor of Samsung and the merger account for 19.8 percent,” said Kim Cheol-beom, a chief researcher at Hanwha Investment and Securities, in a report.

“But there are foreign investors who have a combined 26.7 percent stake in Samsung C&T along with Elliott with 7.1 percent,” he continued, “And we don’t know how the National Pension Service, which owns 10.2 percent of the shares, will react to the plan. Even if the merger proposal is approved, Elliott will likely take this case to an overseas court and seek damages.”