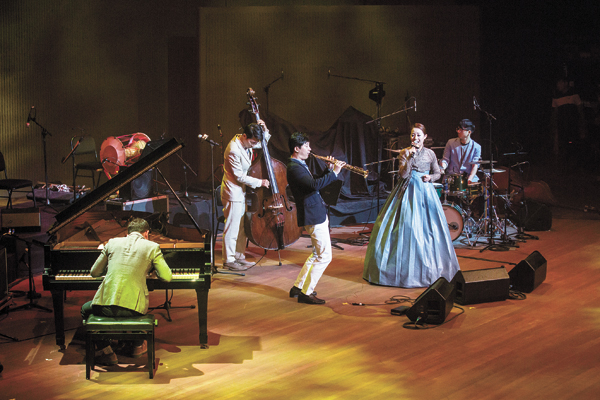 Jazz quartet Prelude performs with pansori, or traditional narrative music, singer Jeon Young-rang during a press conference and showcase last week for the upcoming Yeowulak Festival at the National Theater of Korea. Prelude has been working with gugak musicians since 2011. Provided by the organizer


What would it sound like if gugak, or traditional Korean music, met jazz?

The genres do not seem to have much in common. But several Korean jazz artists working across the globe said they were surprised when they realized how similar they are.

To show how wonderfully the two types of music can create a harmony, a group of jazz and gugak performers came together for this year’s Yeowulak Festival.

The National Theater of Korea has been organizing the annual music festival that is heavily based on Korea’s traditional music over the last five years. 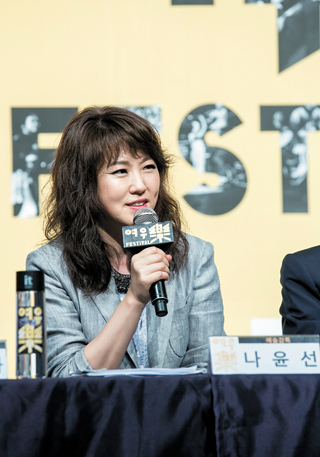 Jazz vocalist Nah Youn-sun has been appointed as the new artistic director of this year’s Yeowulak Festival.

Pianist Yang Bang-ean steered the event until last year, even managing to draw the attention of young Koreans by staging joint performances between traditional and modern Korean music. But jazz vocalist Nah Youn-sun, who is widely respected, especially in Europe, has taken the helm for the sixth edition of the festival, which runs from July 1 to 26.

“Honestly, I don’t know much about gugak,” said Nah during a press conference for the festival held last week at the National Theater of Korea. “But I wanted to take this year as a year for me to study gugak. For the festival, using my broad experience of performing all over the world, I will increase the potential of our gugak music.”

Nah has spread the beauty of Korean music throughout the world by singing “Arirang,” one of the most renowned local folk songs, in a jazz style at most of her live concerts. She said she was surprised how audiences, regardless of nationality, shed tears while listening to Nah and her band perform the song.

Fourteen new works will be staged during the festival under four categories: Director’s Stage, 2015 Choice, Mix&Match, and Sensation.

For the Director’s Stage, Nah will join jazz and gugak musicians to perform three pieces.

For the “Yeowulak Collective,” which will be held on July 1 and 2 at the KB Youth Sky Theater at the National Theater of Korea, Nah’s jazzy voice will harmonize with various instruments, including the geomungo (six-stringed zither), haegeum (a string instrument that is similar to a violin), daegeum (a horizontal bamboo flute), guitar, bass, saxophone and drums.

Under the “Mix&Match” category, there will be four collaborations between Korean gugak musicians and international jazz musicians. Stephane Edouard, a percussionist who is known for impromptu performances, will meld the two genres by playing with gugak group Su:m. The band comprised of six traditional Korean instruments and a vocalist is also known for creating contemporary gugak and holding impromptu performances.

The traditional Korean instrument daegeum and the flute, its Western counterpart, will be used in the show “Wood & Steel.” French flautist Jocelyn Mienniel will join daegeum player Lee Ah-ram to show how two similar instruments, despite one being made from wood and the other from metal, can be so harmonious.

Five performances under the “Sensation” category could attract a younger audience who would never have thought of attending a gugak performance.

Four male Berkeley graduates formed the jazz group Prelude 10 years ago and have been making efforts to break the stereotype that the genre is difficult to approach.

Prelude said they found jazz and gugak to be similar in terms of both genres being impromptu. They met pansori (traditional singing) singer Jeon Young-rang in 2011 and released an album together.

For their performance at Yeowulak, Prelude and Jeon will get together once again, this time with a 16-member choir.

Korean pop singer Lee Sang-eun, who was active in the late 1980s and early 1990s with songs like “Damdadi” and “Gongmudohaga,” says she is not too familiar with gugak but said she wanted to show how her pop-style vocals can also form a great harmony, while sometimes clashing, with the gugak instruments.

“I wanted to focus on ‘roots revival,’?” said Lee, explaining that her performance with jazz guitarist Yim Jong-deok and traditional percussionist Shin Chang-ryol is a result of deep consideration of how to popularize traditional Korean music.

Namgung and Min have been traveling across the globe in efforts to popularize gugak for many years and constantly created modern pieces based on the genre, emphasizing the fact that it can be a fun type of music.

This time, the group and ballet dancers Kim and Lee Young-cheol will show a “convergence performance” of traditional rhythm, ballet, electronic dance music and visual arts.

“I want to show through this stage, how shocking it will be when ballet and samulnori [Korean traditional percussion performance] are combined,” said Namgung.

Min also added that “people won’t visit a restaurant if the food they serve is not delicious.”

“Music is the same. If it’s not interesting and doesn’t attract their ears, they will not go and see the performances. I’ve been focusing on making gugak interesting for the audience across the globe for the past 10 years. That is what I am going to show the audience at this year’s Yeowulak,” he said.

It is Nah’s first time to act as an artistic director of a festival. She expressed the tension she feels about taking on a new role and even trying something new by mixing jazz and gugak. However, she also said she anticipates that the participants and audience will feel joy and euphoria through the festival.

“I’ve heard from veteran musicians across the globe that the feeling of ecstasy they get upon discovering a new chord after accidently dropping a guitar is incomparable to the ecstasy they get upon being able to play a difficult chord on a guitar after constant practice,” said Nah, explaining that accidentally discovering something new musically by trying out new things will be the main focus of the festival.

“The curtain hasn’t been raised, and we’ll find out if this experiment will end up as a success or not, but I always think it’s better to regret after trying than regret by not trying. So we are giving it a shot,” she added.

Yeowulak Festival runs from July 1 to 26 at various halls of the National Theater of Korea.

For the schedules and more information, go to www.ntok.go.kr.