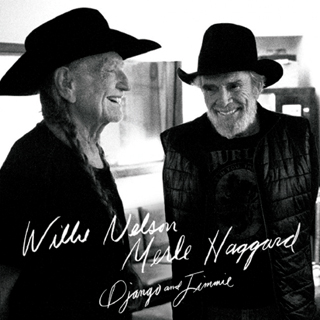 The two grand old men of country music, Willie Nelson and Merle Haggard, are among the last living ties to an era when giants like Ernest Tubb and Bob Wills filled honky-tonks. Nelson is 82 and Haggard is 78, and while their warm voices show some mileage, their range of expression remains remarkable, and their phrasing is often impeccable.

On their fourth album together, “Django and Jimmie,’’ the feisty fellows lean on shuffling novelties and lighthearted swing, such as the title track, a tip of the cowboy hat to French guitarist Django Reinhardt and country blues pioneer Jimmie Rodgers.

“It’s All Going to Pot’’ playfully engages Nelson’s appetite for marijuana and ranks as the album’s most memorable original.

Most of the originals - “Unfair Weather Friend’’ and “Live This Long’’ - don’t measure up to their classics, and the project would have benefited from better material. Hearing the old friends share lines on Bob Dylan’s “Don’t Think Twice, It’s Alright’’ indicates just how good “Django and Jimmie’’ could have been if the two had approached the project with loftier ambitions. AP