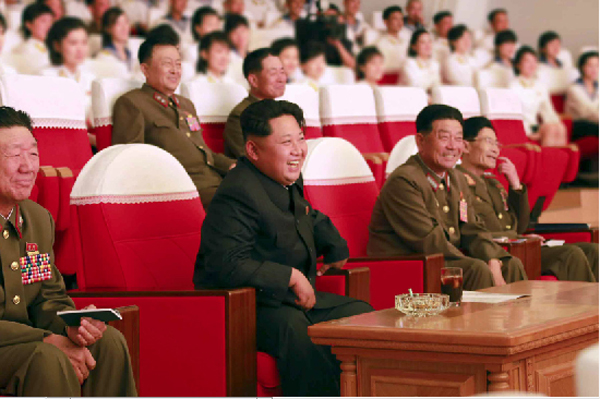 In the photo in the June 15 edition of the Rodong Sinmun, a smiling Pak Yong-sik, right, is seen sitting next to North Korean leader Kim Jong-un, center. [Rodong Sinmun]

Four-star North Korean General Pak Yong-sik appears to have been promoted as Pyongyang’s newest defense chief to replace Hyon Yong-chol, who was allegedly executed in April.

Pak was ranked No. 2 on a list of military officials who accompanied North Korean leader Kim Jong-un to a military art propaganda squad performance, which was included in a report Monday by the North’s official Korean Central News Agency (KCNA).

The general was ranked right under Hwang Pyong-so, the director of the General Political Bureau of the North Korean Army, and ahead of Ri Yong-gil, the chief of the General Staff of the Korean People’s Army, right where Hyon’s name typically would have appeared.

A photo published in the Rodong Sinmun on Monday showed a smiling Pak sitting just to Kim’s right at the event. Hwang sat to the North Korean leader’s left.

This order, according to observers here, could likely indicate that Pak, a former department director of the Ministry People’s Security, has replaced Hyon as North Korea’s defense minister.

The National Intelligence Service (NIS), South Korea’s top spy agency, reported last month that Hyon had been sentenced to death on April 30 for disrespecting Kim Jong-un, among other reasons. His execution was suspected to have been carried out with an anti-aircraft gun via firing squad.

Pyongyang, however, has yet to officially confirm that Hyon was purged.

Pak, on the other hand, has catapulted up the ranks under the Kim Jong-un regime, moving up two ranks over the past year from a three-star lieutenant general. He was promoted to a four-star general last month.

Pak has been spotted frequently in North Korean media in recent weeks, standing by Kim’s side at military events, which led to speculation that he may have replaced Hyon.

The four-star general is the sixth candidate for defense minister named since the young Kim came to power in December 2011.

Pak was spotted saluting Kim at a military event on May 29 in documentary footage that was aired June 5 by the North’s Korean Central Television. In the clip, he appears to have taken over the responsibilities usually conducted by the defense minister.