Hospital focuses on containment after shutdown

Hospital focuses on containment after shutdown 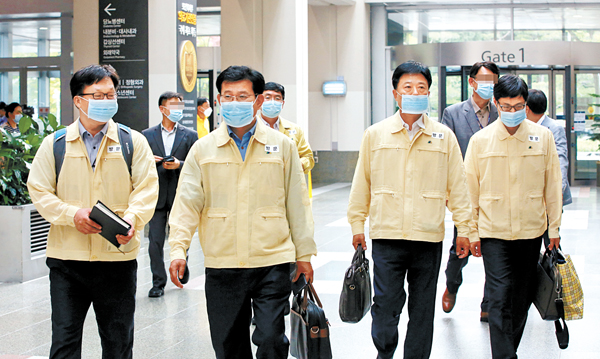 An inspection team headed by a director-level official from the prime minister’s office walks into Samsung Medical Center in Seoul on Monday. [NEWSIS]

The employees at Samsung Medical Center faced a series of unfamiliar protocols on Monday morning, the first working day after the hospital partially shut down over the weekend in an attempt to prevent the further spread of Middle East respiratory syndrome (MERS) in the country.

The hospital on Sunday announced that it would not accept any visitors or new patients, including in its emergency room, in an effort to keep the outbreak from infecting more people. As of Monday, 150 people had tested positive for the virus and 16 had died.

Employees were asked to show their ID cards to building security guards, and some who left their badges in their offices had to ask their coworkers to bring them out.

The relatives of the hospital’s patients also had to present identification, and only one family member is allowed in at any time. 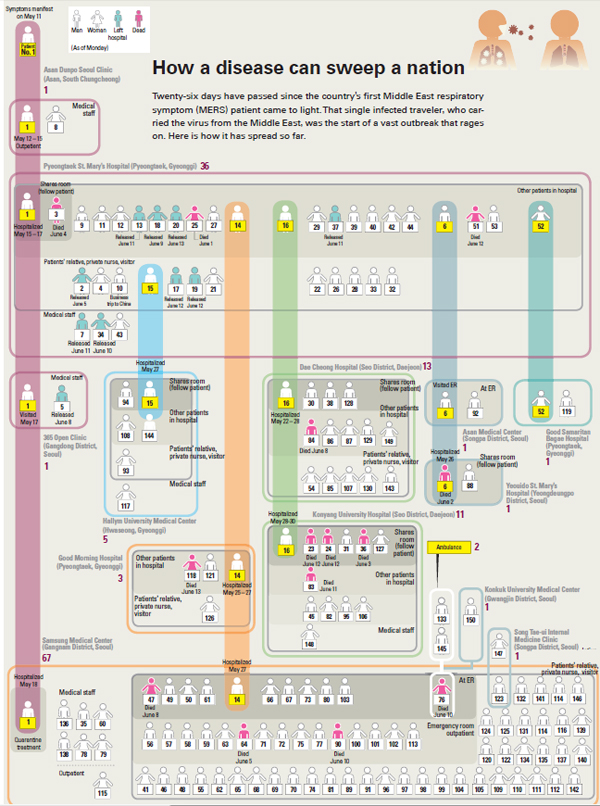 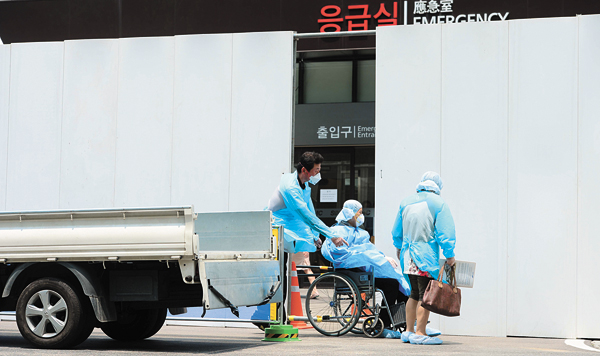 A temporary fence was set up around the emergency room of Samsung Medical Center in Seoul on Monday after the hospital was forced to partially close down operations on Sunday. [NEWSIS]

Due to the partial shutdown, approximately 5,000 patients slated for doctor’s appointments on Monday had to reschedule their visits for after June 24 - though that only applied to those who had been informed of the news.

The shutdown has caused a number of administrative problems, and it’s also trapped some patients who are there for minor medical issues.

“Why are you stopping me? I’m just here to get my pills,” she cried.

After arguing for about five minutes, the guard finally made a phone call to allow her in.

But another woman, 65-year-old Lee Gi-sun, who came to the hospital to pick up medication for her husband, suffering from severe pneumonia, didn’t have quite the same fortune.

“My husband’s condition has really begun to worsen recently and we ran out of medicine two days ago,” she said. “I said I have to get the pills, but they just stopped me and kept telling me to call the hospital’s information line.”

Still, other patients were forced to stay at Samsung Medical Center even though they don’t require intensive treatment.

A 56-year-old man, who came to the center with his mother, whose artificial valve became blocked during a dialysis treatment nearly two weeks ago, was on the verge of moving her to a convalescent hospital.

“The convalescent hospital refused and said they could accept her after the MERS outbreak,” he said. “We had no choice but to stay here because there are no other hospitals and her doctor reassured us that there is nothing to worry about.”

On Monday, the Ministry of Health and Welfare also dispatched an inspection team headed by a director-level official in the prime minister’s office to Samsung Medical Center. The team will stay at the hospital to investigate why the hospital failed to keep MERS from rapidly spreading.

The MERS outbreak, which has already expanded to include fourth-generation infections, grew to five more confirmed cases on Monday. The total number of MERS cases in Korea currently stands at 150, including five fourth-generation patients.

Patient No. 147 was found to have been infected while she was treated on June 8 at a local clinic in Seoul with Patient No. 123.

Patient No. 123 was infected by Patient No. 14, considered a “super spreader,” who was treated at Samsung Medical Center and infected at least 60 people during his time there.

Patient No. 148 is a nurse at Konyang University Hospital in Daejeon who conducted CPR on Patient No. 36, who contracted the disease from Patient No. 16 in the same hospital room and died on June 3. The Daejeon hospital announced Monday that it was partially closing the building.

The two ambulance workers were the country’s first fourth-generation MERS infection cases. Two of the five newest MERS patients are included in the third generation.

Patient No. 146, who is the son of Patient No. 76, contracted MERS from Patient No. 14 at Samsung Medical Center on May 27. Though he tested positive on Sunday - later than the maximum latent period of two weeks - the health authority said he may have exhibited symptoms earlier and did not rule out that he caught the disease from his mother, which would make him a fourth-generation patient.

The health authority has put priority on keeping the disease within medical facilities so that it does not spread within local communities and has maintained its stance that the disease is not threatening enough to spread among the public.

As of Monday, the Ministry of Health and Welfare said that its epidemiological study on Patient No. 119 was not yet finished and that officials still had not figured out how the 35-year-old police officer contracted the disease.

He was previously believed to have been infected by Patient No. 52 at a local hospital in Pyeongtaek, Gyeonggi, though it was later discovered that the policeman had left the hospital before Patient No. 52 arrived.

“It’s unlikely that [Patient No. 119’s] infection was contracted from within medical facilities,” an official from the Korean Centers for Disease Control and Prevention said on Monday. “But it means that we just did not conclude that it is 100 percent an infection from the local community, and we will conduct further investigation.”

Despite the uncertainty, the quarantine authority reaffirmed that it was not heightening the level of crisis yet.

“We believe we can prevent further the spread if we take good care of those who came in contact with patients and we are putting our every effort into it,” a Health Ministry official said. “We are not considering raising the level of crisis at this time.”