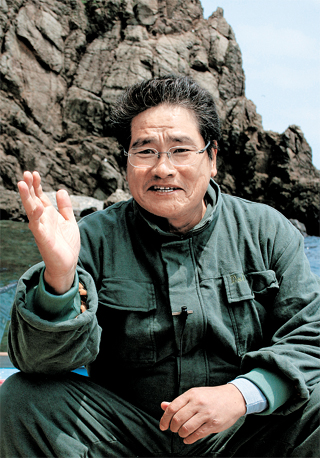 Although the race never happened, Cho said he could beat a turtle in a long distance race with his endurance and desire to challenge. 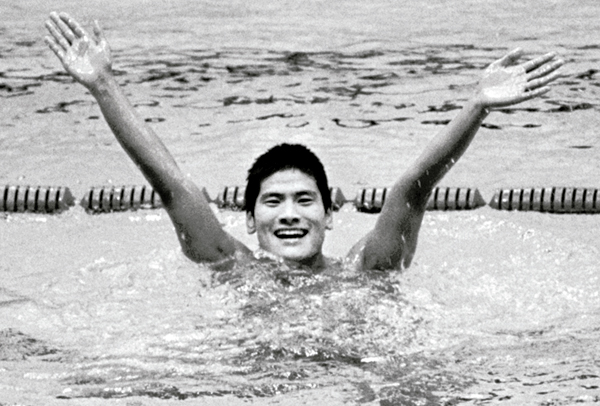 Cho Oh-ryun celebrates after winning the 1,500-meter freestyle in the 1974 Asian Games in Teheran. [JoongAng Ilbo]

While many young people today know Park Tae-hwan as the nation’s top swimmer, the older generation remembers a time when Cho was Korea’s best.

Cho was the first Korean swimmer to gain international attention. He passed away in 2009 from a heart attack, at the age of 57. 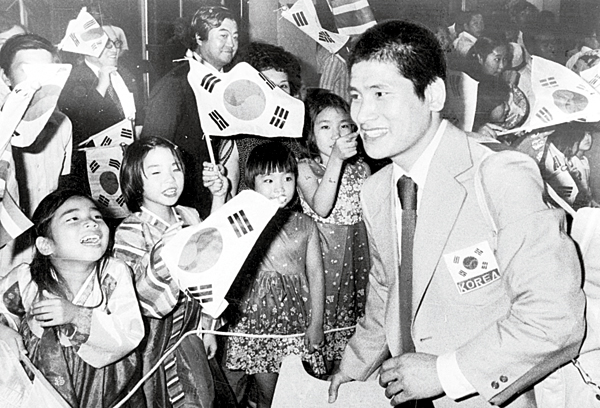 Cho Oh-ryun is welcomed at Bangkok International Airport as he arrives for the 1978 Asian Games. [JoongAng Ilbo]

Nicknamed the “Asian Seal,” Cho won four gold medals in the Asian Games in the 1970s, although he never medaled in the Olympics or Worlds. But sports pundits argue that remembering Cho as merely a four-time Asian game gold medalist diminishes his impact on the country.

After all, he is remembered as an athlete who moved hearts with his courage and desire to meet new challenges. He’s also recognized for promoting patriotism and the nation’s history through swimming.

Cho was born in Haenam, South Jeolla, as the last of 10 siblings (five brothers and five sisters) in 1952. Growing up in the countryside, he would swim in creeks and small rivers, catching fish.

In 1965, Cho went to Jeju Island and stumbled on a national swimming competition. After watching the event, he felt confident that his swimming skills were not inferior to the national competitors.

Three years later, Cho decided to go to Seoul, hoping a third place finish in the national swimming competition would lead to a free education in the nation’s capital.

After dropping out of Haenam High School, Cho first stayed at his sister’s house in Seoul, but soon moved out to house near the YMCA Swimming Center - Korea’s only public indoor pool at the time.

Cho took various part-time jobs to pay for his membership fee, doing everything from cleaning shoes to working as a delivery man. But he wasn’t able to scrape together enough money for proper gear, so he trained without goggles and in shorts rather than a swimsuit.

After learning basic strokes from another YMCA member, Cho won the regional qualifiers for men’s freestyle in 400 meters and 1,500 meters in June 1969. He still had no proper swimsuit, and competed in the adult category because he was a high school dropout.

His impressive performance later earned him a spot at Yangchung High School in western Seoul and an invite to practice at the national training facility, Taeneung National Training Center, from the Korean Olympic Committee’s then-president, Min Kwan-sik.

In the 1960s, Japan was the top Asian country in swimming, winning all 23 gold medals in the 1966 Asian Games. While most people anticipated that Japan would sweep the 1970 Asian Games, 18-year-old Cho surprised by winning gold in the 400- and 1,500-meter freestyle. Cho won the same events four years later in the 1974 Asian Games, confirming his victories were no accident.

At the national level, Cho was untouchable. From 1969 to 1978, he rewrote Korean records 50 times. Excluding the 100-meter backstroke and 100- and 200-meter breaststroke, Cho has set at least one Korean record in all other events.

After retiring, Cho worked temporarily worked at a bank, but couldn’t stay out of the water for long. While running swimming centers, he found a new challenge: testing his swimming endurance outdoors.

“My swimming is not actually a challenge to mother nature, but a process by which my body becomes a part of nature,” Cho said in past interviews with local media.

In 1980, Cho became the first man to swim across the Korean Strait between Busan and Japan’s Tsushima Island, about 53 kilometers (33 miles), at 13 hours 16 minutes and 10 seconds. Two years later, he swam across the Dover Strait between Great Britain and France in 9 hours, 35 minutes.

Cho served as a board member of the Korea Swimming Federation starting in 1998, but developed a tense relationship with the governing body after it wouldn’t give him the chance to coach professional swimmers.

When his first wife, whom he married in 1980, died in 2001, Cho fell into depression. But it didn’t take long for him to regain his challenging spirit.

Cho became inspired after seeing his second son, Sung-mo, win silver in the 1,500-meter freestyle at the 2002 Asian Games in Busan. In 2003, Cho swam down the Han River from Hwacheon County, Gangwon, to Yeouido, western Seoul - about 235 kilometers.

The swimmer has always been outspoken about his patriotism, but as he became older, his events became more political.

When Japan disputed Korea’s ownership of the Dokdo islets in 2005, Cho and his two sons swam a relay from Ulleung Island to Dokdo, about 87.4 kilometers, in protest.

In 2008, Cho alone swam around Dokdo 33 times to commemorate the 33 Koreans who signed the Declaration of Korean Independence in March 1, 1919. Interestingly enough, Cho majored history in at Korea University.

In April 2009, Cho remarried and planned to swim across the Korean Strait again in 2010 for the 30th anniversary of his first challenge. He said the event would be the last of his swimming career.

But just four months after remarrying, Cho died of a heart attack at his house in Haenam.

“I know I’m old, but if I succeed, I can prove that age is just a number,” he told the JoongAng Ilbo in 2009 about his plan to cross the strait.

“Also, I heard there is a recession and I want to energize the people. Lastly, I also want to test myself. I lived my life in the water, and I want to ask mother nature whether I was really a ‘friend’ of the water.”