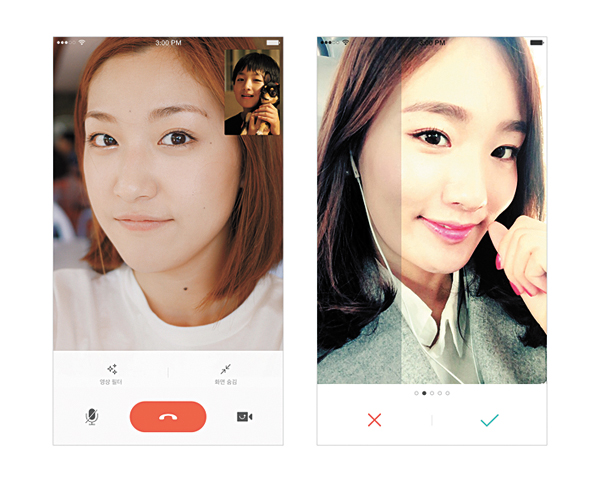 Daum Kakao added a video chat function to its instant messaging app KakaoTalk on Tuesday in a move that could lure users away from Google’s Hangouts and Skype.

The company said that the app’s VideoCall would allow for video chatting on the communication platform, supported on both the Android and Apple iOS operating systems.

The feature is only offered for users in Korea “for the time being,” the company said, implying that the service could be extended abroad.

Video calls can be made when users open up their friend’s profile page and press the Free Call button. The VideoCall menu can also be found in the chat room menu placed on the left of the app’s text box.

A distinctive feature of Kakao’s video chat is that it comes with four types of image filters, the company said.

The company said it expects the addition of the face-to-face call function to increase intimacy for its users.

“We hope the inclusion of VideoCall will enhance intimacy among friends, family and significant others, allowing them a new and vivid connection,” said Derrick Park, KakaoTalk’s lead project manager.

“We will continue to follow our philosophy of putting the needs of our users first to improve their communication experience.”

Users can get access to the new function after they have updated the platform.

Daum Kakao has also introduced KakaoTV, a video streaming and sharing service, for its latest version of KakaoTalk.

Not only does the new feature provide different kinds of broadcasting programs and movies, it also allows people to share and watch video clips in KakaoTalk chat rooms.

KakaoTV, located in the menu section, is designed to provide tailored video content that might suit the differing interests of users.

The update also includes an improved back-up system. If a user presses the Chat Backup button, they can retrieve their chat logs later even if they delete the messenger and reinstall it.

The back-up function will not work under certain circumstances, however.

For it to operate properly, KakaoTalk needs to be reinstalled under the same phone number and operating system.

Users also need to restore the chat history within three days after the day they reinstall the app.

The company said the rule is intended to protect privacy.

Given the fact that more than 90 percent of Koreans use KakaoTalk, the new offerings are likely to have an effect on people’s everyday lives.

Daum Kakao, a merger between portal site Daum and KakaoTalk, has ventured into adding different features to the popular app, whose function sometimes goes beyond communication, though the profitability of the extra services on the app is being questioned.

The company has rolled out payment system KakaoPay, taxi-riding app KakaoTaxi and shopping platform KakaoStyle, to name a few.