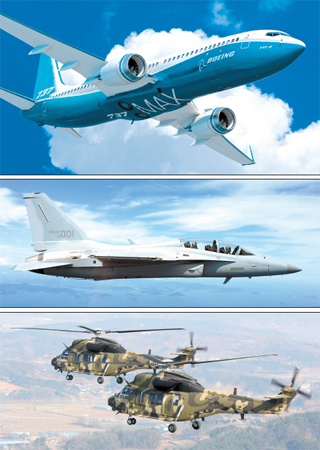 From top: The B737 Max that Korean Air purchased from Boeing, and the FA-50 fighter and Surion helicopter manufactured by Korea Aerospace Industries (KAI). Provided by Korean Air, KAI

The International Paris Air Show 2015, the world’s biggest aircraft exhibition event, got underway in France on Monday local time, and Korean businesses are taking part as both sellers and buyers.

Korean Air has made its biggest investment ever to replace aging planes, and Korean Aerospace Industries (KAI), a state-run military aircraft maker, will try to sell its Surion helicopter and other products.

The 51st biennial exhibition features 2,260 aviation-related businesses from 47 nations with 120 aircraft on display. The event runs through Saturday and more than 300,000 people are expected to visit, according to the organizers.

Korean Air said Tuesday it has purchased 100 aircraft to replace planes being used for short-haul routes and attract more passengers, including Chinese, the biggest group of tourists for Korea, according to the industry. Estimates put the value of the contract at 13 trillion won ($12.2 billion). 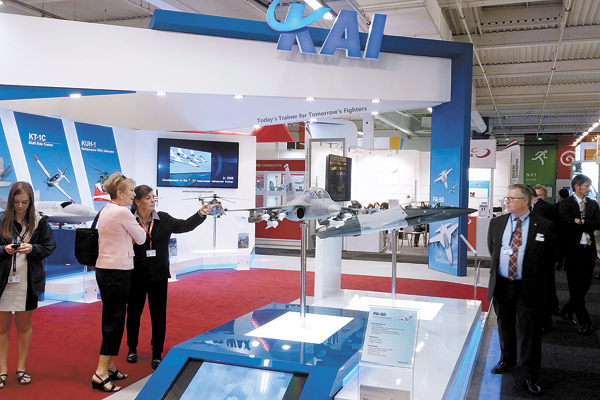 Visitors browse the Korea Aerospace Industries exhibition booth at the International Paris Air Show 2015 in France. Provided by the company

“Year 2019 will be our 50th anniversary and we decided to make the biggest investment ever,” Korean Air said in a statement. “We will provide better quality of service by replacing old airplanes with new units.”

The nation’s leading airline said it bought 50 units of Airbus’ A321 Neo and also bought 50 units of Boeing’s B737 MAX-8. Korean Air currently flies the Airbus A380 jumbo jet, but it would be the first time it has used the smaller, single-aisle A320.

The company currently uses the B737 as its primary aircraft for short-haul routes.

With the new purchase the Korean Air fleet will increase from 151 aircraft to 251. The company also plans to buy 10 of Boeing’s next-generation B747-8i airliners by 2017. Compared to the B747-400, the B747-8i is expected to help the carrier improve profitability by offering better fuel efficiency and 50 additional passenger seats. The new planes will be replacing aging B737NG, which will also help cut operating cost by 8 percent.

Ha Sung-yong, president and CEO of KAI, is trying to sell the company’s products and build a stronger relationship with other aircraft manufacturers to increase exports.

KAI’s goal is 3 trillion won in revenues this year, with 60 percent coming from exports. The company said it is developing an upgraded version of the Surion that can perform a variety of operations, such as medical evacuations. It said negotiations are in progress to export the helicopter to South America, the Middle East and Southeast Asia.

KAI also is trying to strengthen marketing of the T-50 training jet with partner Lockheed Martin to join the bidding for the program known as T-X, which was established by the U.S. Air Force to purchase a two-seat jet trainer to replace the Northrop T-38 Talon. The project is worth 38 trillion won, and the manufacturer will be decided in 2017.

Analysts in the industry say sales during the air show might be as many as 400 units more than the previous event. Airbus beat Boeing in sales at the Farnborough Air Show in the United Kingdom last year and the Paris Air Show two years ago.