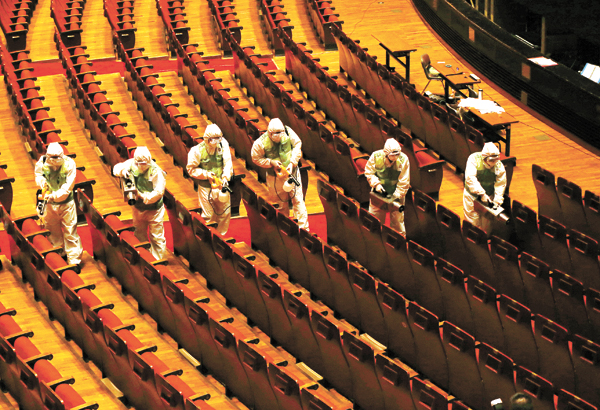 Quarantine workers spray disinfectant to sterilize the main theater of the Sejong Center for Performing Arts in central Seoul to prevent the transmission of MERS. By Kim Seong-ryong

Disquiet over Middle East respiratory syndrome (MERS) deepened in Seoul Tuesday after it was revealed that an ill medical aide from Seoul’s Samsung Medical Center travelled widely around the city before he was quarantined Friday.

The central government has officially maintained that MERS infections were contained to medical facilities, but the Seoul Metropolitan Government conducted epidemiological studies on the 55-year-old aide and released the result on Tuesday.

Between the time he was infected and finally confirmed as a MERS patient last Friday, he used subways and visited crowded areas like a hair salon and a mall.

“Patient No. 137 used the subway between Seoul National University Station and Ilwon Station, transferring at Seoul National University of Education Station, for at least seven days [after exhibiting symptoms] including from June 5 to 8 when his condition worsened,” said Kim Chang-bo, the city government’s health authority. “We conducted sterilization of the mall and hair salon and isolated those who came in close contact with the patient at home.”

The Seoul Metropolitan Government, which is cooperating with the central government for MERS prevention, also said on Tuesday that it will sterilize the subway stations and give advice to anyone who suspects they have contracted the disease through the Dasan Call Center at 120. 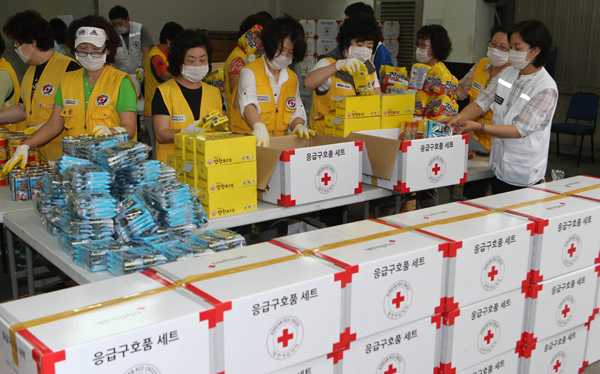 In the Busan branch of the Korean Red Cross on Tuesday, volunteers package relief supplies that will be handed out to people who are quarantined at home because they are suspected of contracting the disease. By Song Bong-geun

But it will be difficult to track down everyone who traveled on trains with Patient No. 137 even after the city government examines CCTV footage from Seoul Metro.

“Faces are not very recognizable on the video footage,” Kim said. “Also, it is technically impossible to track down every single passenger because of the number of people using subways during commuting hours.”

Those non-salaried employees were not initially included in the government’s quarantine coverage, and the city government said 73 of them have reported suspected MERS symptoms so far, meaning that there can possibly be more cases like Patient No. 137.

Fear of MERS spreading into local communities is not just contained in Seoul.

The Ministry of Health and Welfare on Tuesday announced four more confirmed cases of MERS, raising the total to 154. Three of them are third-generation patients and the quarantine authority admitted they were off the radar until they were confirmed for MERS.

“Patients No. 151, 152 and 154 were not under the government’s isolation measures, and only Patient No. 153, [a fourth-generation patient who caught the disease from Patient No. 118 on June 5], was tracked down,” said Kwon Jun-uk, an official of the Health Ministry.

One of the three third-generation patients is Patient No. 154, a 52-year-old civil servant in Daegu. He contracted the disease while he visited his mother at Samsung Medical Center on May 27 and 28, and subsequently continued to work until he began to feel a chill on Saturday. He was found to have visited a public bath before he visited a local public health center and was confirmed for MERS on Monday.

The city government of Daegu also quarantined more than 50 of Patient No. 154’s coworkers in their homes. His wife and son tested negative and are quarantined at home. 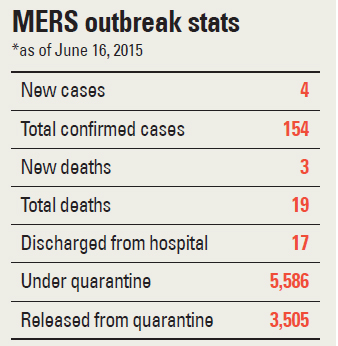 The health authority has not been able to figure out how Patient No. 119, a 35-year-old policeman in Pyeongtaek, Gyeonggi, was infected. It was previously believed that he was infected by Patient No. 52 at a local hospital, but it later turned out that Patient No. 52 came to the hospital after the policeman left.

The policeman is believed to have infected others because he was released from the hospital after one of his tests was negative. After being restricted at a state-run hospital from June 2 due to an initial positive test, he was released later when his second test was negative on June 3. As his condition worsened, he visited a local hospital and then was confirmed for MERS on June 10.

With the disease still spreading, experts say it is the vigilance of the public that is most needed.

“In terms of quarantine, the first step is the government’s separation of those who had contact with patients, the second step is to manage them and the last step is the sincerity of people,” said Prof. Eom Joong-sik of Hallym University Medical Center in Gangdong District, eastern Seoul. 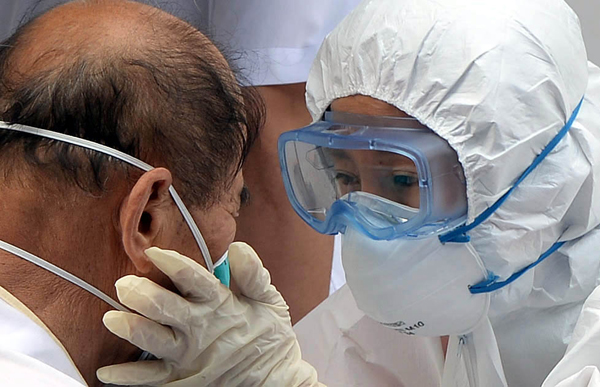 An ambulance worker in full protective gear on Tuesday examines a patient to check whether he has MERS symptoms before transporting him to a hospital. [NEWSIS]

“We are already in the third stage, where we have to require a heightened consciousness of the public.”

Kang Dae-hee, Dean of Seoul National University’s College of Medicine, also emphasized the role of people in the preventive efforts.

“Control measures focused on certain bases is now meaningless because there are fourth-generation patients and thousands of others are being isolated in Seoul,” Kang said. “Authorities should disclose all information and people need to be well aware of it.”

Meanwhile, the public is increasingly worrying about the virus threatening the lives of healthy younger people. At the start, only the elderly with preexisting medical conditions were considered likely to succumb to MERS.

The Health Ministry announced three more fatalities, Patients No. 38, 98 and 123, on Tuesday, raising the total to 19. The fatality rate as of Tuesday rose to 12.3 percent.

Patient No. 38, a 49-year-old male, is the country’s first victim in his or her 40s, though he previously suffered from liver cirrhosis and diabetes.

But two of the 19 dead patients seemed to have no underlying diseases.

The ministry said Tuesday that Patient No. 123, a 65-year-old male, did not have any underlying disease, just like Patient No. 51, a 72-year-old female who died on Friday. Seventeen others were previously suffering from other diseases.

The lives of two men in their 30s are also at stake. Patient No. 35, a 38-year-old doctor at Samsung Medical Center, and Patient No. 119, a 35-year-old policeman, are known to be in critical condition and on life support equipment called extracorporeal membrane oxygenation (ECMO), which is used in case of lung or heart failure.

It was known that the doctor had allergic rhinitis, a minor ailment, and the policeman had no underlying conditions.

One suspected reason for the two falling into critical condition is an immune response known as a cytokine storm, an overly activated immune system that destroys normal cells of the body.