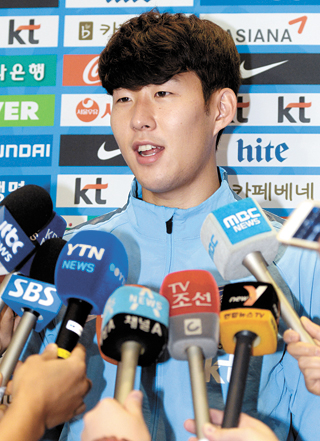 Son Heung-min speaks to reporters at Incheon International Airport on Wednesday. Son had a goal and an assist to lead Korea’s victory against Myanmar on Tuesday. [NEWSIS]

The 22-year-old, who plays with Bayer Leverkusen in the German Bundesliga, played a pivotal role in Korea’s 2-0 victory during the Group G regional qualifier at Rajamangala Stadium in Bangkok, making a goal and an assist.

After taking a corner kick that helped Lee Jae-sung score with a header in the 35th minute, Son cemented Korea’s victory in the 67th minute with a direct free kick from about 25 yards. The powerful shot zig-zagged into the net, and Son raised his arms with an expressionless face - as though the goal had been the easiest thing in the world.

Korean football fans said Son’s goal and celebration reminded them of Cristiano Ronaldo. The 30-year-old Portuguese footballer is known for his signature “knuckleball” free kick, which moves unpredictably into the goal, and a celebration style some describe as cocky.

Son, who now has 11 goals in 44 matches for Korea, said his celebration wasn’t an imitation of Ronaldo’s, though he did think about the three-time Ballon d’Or winner when taking the shot.

“I was aware of Ronaldo’s style of free kicks,” Son said to local reporters after arriving at Incheon International Airport on Wednesday. “However, I didn’t try to imitate Ronaldo when I was celebrating my goal. My face just expressed the bewilderment I felt the moment the ball went in.”

In previous interviews, Son has claimed Ronaldo as his role model, saying the former Manchester United player became a master of the sport through hard work. It was reported that the he even picks Ronaldo whenever he plays football-themed video games.

Son has attempted free kicks several times with Leverkusen, but hasn’t had much of a chance with the German club’s main kicker, Hakan Calhanoglu.

Son already showed off his powerful kick in the friendly against Saudi Arabia in January, though the shot didn’t make it into the goal.

The former Hamburg FC forward said it feels good that Korea started its second round of the Asian qualifiers with a victory in a difficult away match. Korea is now the leader in Group G, which includes Lebanon, Kuwait, Laos and Myanmar.

“Because it was our first match of the World Cup qualifier, there was a bit of impatience,” he said. “I just thought we need to score first.”

Other teams are expected to play with defensive tactics like Myanmar, so Son knows the forwards will need to work harder. But he believes that winning the match is more important than scoring lots of goals.

“We are one of the strongest teams in Asia,” he said. “I think opponents will sit back and defend while looking for counter attacks when they play against us. So we should be well prepared for that.”