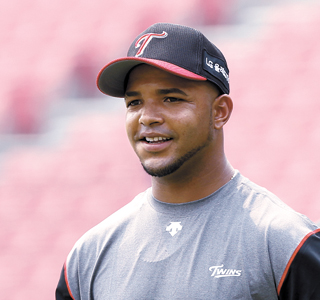 The release of Hannahan on Monday was unexpected because he’s performed impressively since his late appearance in the Korea Baseball Organization (KBO) League in May. The 35-year-old American had a .327 batting average in 32 games, with four home runs.

But Hannahan, who played 614 games in the MLB, has been unable to fully recover from injuries in his legs and back. He was forced to make a late debut, and then only appeared as a first baseman or designated hitter. When the Twins signed him with a one-year contract worth $1 million, the former Cincinnati Reds and Cleveland Indians player was expected to cover third base.

In an interview with Ilgan Sports, an affiliate of the Korean JoongAng Daily, Twins manager Yang Sang-moon said he was concerned about the infielder’s long-lasting injuries.

During spring training, Hannahan was bothered by pain in his legs and back, and didn’t appear for more than a month after the Twins’ March opener.

Jimenez, the replacement for Hannahan, played against the Kia Tigers in Wednesday’s game. The 27-year-old Dominican signed a one-year deal worth $350,000 with the Seoul-based club.

Jimenez has appeared in 68 games in the MLB with a batting average of .217. He made his big-league debut with the Los Angeles Angels in 2013, and then moved to the Milwaukee Brewers and Boston Red Sox this season.

In the minors, the right-handed batter played 618 games, and had a batting average of .295 with 91 home runs and 453 RBIs. Yang said they recruited Jimenez because the third baseman has defensive skills and hitting power.

The coaching staff has also been reshuffled. On the same day it released Hannahan, the club announced its franchise star Seo Yong-bin will take over Roh Chan-yeop’s role as hitting coach for the first team. Roh will coach players on the minor league squad.

Park Jong-ho and Kyeong Heon-ho, who coached players on the Twins’ minors team, have moved up to the majors. Park will coach defense, while Kyeong will be in the bullpen.

The changes are part of the Twins’ plan to escape from the bottom of the KBO League. Since May 3, the Twins have fallen to ninth place. The only team behind them is the KT Wiz, which is in its first season. As of Wednesday, the Twins have lost seven of their last 10 matches.