A bipolar father is key role in moving film ‘Infinitely’

A bipolar father is key role in moving film ‘Infinitely’ 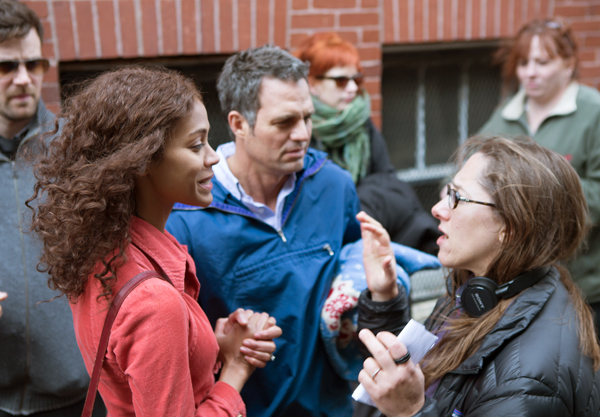 Written and directed by Maya Forbes, the film covers a year from Forbes’ own childhood in the 1970s, when her bipolar father, Cam, cared for her and her sister Mass in Cambridge, while their mother got her MBA in New York.

One of Forbes’ three daughters, Imogene Wolodarsky, plays a version of Forbes as a 10-year-old. Her husband, Wally Wolodarsky, is a producer. Her younger sister, China Forbes of the group Pink Martini, composed a song for the movie.

“Infinitely Polar Bear,’’ a family tale told with the help of family, could hardly be more personal. It even opens in a montage partly composed from old family movies shot on Super 8.

“I was weeping half the time,’’ Forbes, a writer on “The Larry Sanders Show’’ and executive producer of the TV miniseries “The Kennedys’’ says about shooting her directorial debut. “But I’m very comfortable weeping. I cry multiple times per day. So it was a very emotional experience.’’

The autobiographical nature of “Infinitely Polar Bear’’ - which opens Friday, Father’s Day weekend - gives the film a close-to-the-bone affection that would be impossible to conjure out of thin air. The film, led by Mark Ruffalo’s empathetic lead performance as Cam, has a comic, offbeat tone of its own. “One foot on the banana peel, the other in the grave’’ is how Ruffalo describes it.

Ruffalo was drawn to the part for the breadth of behavior it encompassed, from dead-eyed depression to manic upswings.

“I have family members that are bipolar and I know what mania looks like,’’ says Ruffalo. “It was written in the script, the swings. We were always seeing how far we could take it out before it fell off the table. But it was also exhilarating to play, and freeing.’’

His Cam, a well-educated eccentric from a wealthy New England family, is sometimes incapable of handling the demands of two young girls. But with a cigarette hanging off the side of his mouth, he’s playful and a devoted teacher.

“I went on a whole journey with my father: Is he a good father?’’ asks Forbes. “And the conclusion I came to in the end: He was a great father. I had such a connection to him and he taught me so many things. I guess I’d say my dad was a feminist because he supported my mother and what she went off and did. And he supported both of his daughters going out and being strong. He didn’t want us to be wimps.’’

By today’s standards, or even those of the ’70s, many would say Cam was unfit to parent. Their apartment is a jungle of unfinished projects and unwashed dishes. When overburdened, he leaves his daughters at night to blow off steam at a bar with the parting advice: “If a rapist knocks, don’t let him in!’’

But “Infinitely Polar Bear,’’ which takes its name from the younger daughter’s mangling of “bipolar,’’ is an ode to a dedicated father (Cam died in 1998) doing the best he can, and a family struggling to get by. (Zoe Saldana plays the mother.)

“I was trying to remind myself that kids are so resilient,’’ says Forbes. “I felt like all around me in the culture currently is: ‘Be afraid. Your kids can’t handle anything. They have to be protected constantly.’ When I grew up, out of some of the hardest things, I got some of the best things. I wouldn’t be who I am today and I like my life.’’

Family dynamics, artfully depicted in the film, played out during production in Providence, Rhode Island, too. Forbes acknowledges she was perhaps “a little harder’’ on her daughter than other young actors. Her family and Ruffalo’s three children hit it off.

“We ate every meal together. I cooked for them, they cooked for me. It was very familial,’’ says Ruffalo. “By the time we all finished it, every single person in the crew was crying. I’ve never seen anything like it.’’

“Infinitely Polar Bear’’ arrives at a time when gender equality in Hollywood and the low number of female filmmakers have found increasing attention. It’s good timing, says Ruffalo, for a film directed by a woman about a feminist stay-at-home father. But he wonders if movie directing might not appeal to women the same way it does to men.

“I think it’s more the women than anything else,’’ says Ruffalo. “There’s definitely sexism in the industry. Do women feel like it’s just a closed door on them or is it just not something that’s generally that attractive because it’s egotistical, maybe?’’AP