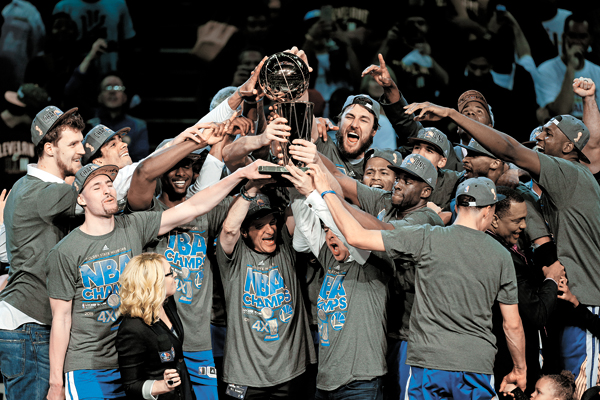 Members of the Golden State Warriors celebrate after winning the NBA Finals against the Cleveland Cavaliers in Cleveland on Wednesday. The Warriors defeated the Cavaliers 105-97 to win the series 4-2. [AP/NEWSIS]

CLEVELAND - The Golden State Warriors clinched their first NBA championship since 1975 by beating the Cleveland Cavaliers 105-97 in Game 6 on Tuesday, extending Cleveland’s even-longer title drought and denying LeBron James the fairy-tale finish to his homecoming season.

League MVP Stephen Curry and Andre Iguodala - named as an unlikely Finals MVP - each had 25 points for the Warriors, who won the final three games after Cleveland had led the Finals series 2-1.

“To be able to hold this trophy and all the hard work we’ve put into it this season, this is special,’’ Curry said. “We’re definitely a great team and a team that should go down in history as one of the best teams from top to bottom.’’

The Warriors overcame James’ best efforts in the series and followed their 67-win regular season with a title despite none of their players having had any previous NBA Finals experience entering the series.

James finished with 32 points, 18 rebounds and nine assists, falling just shy of what would have been a record third triple-double in the series.

“Doesn’t matter if I’m playing in Miami or playing in Cleveland or playing on Mars,’’ he said. “You lose in the finals, it’s disappointing.’’

He simply did not have enough support from an injury-stricken Cavaliers roster, and a half-century-long title drought in Cleveland continues, with no team from the city having won a title in the top level of U.S. pro sports since the Cleveland Browns in 1964.

Draymond Green recorded a triple-double for the Warriors, and for the first time since Gerald Ford was president, disco was in vogue and Rick Barry was flicking in free throws under-handed, the best pro basketball team resides in the Bay Area.

After falling behind by two points early in the third quarter, the Warriors took control with Curry and Iguodala leading the way.

They outscored the Cavaliers 28-18 in the third quarter, quieting a rocking Cleveland crowd and opening a lead even James couldn’t overcome.

Golden State, having pushed its lead out to 15 points in the closing stages, allowed the Cavaliers to creep back within four points in the final minute and a remarkable comeback momentarily seemed possible, but the Warriors hung on.

James returned from Miami to Cleveland this season to deliver a title to his home region, but the 30-year-old, left to do most of the work by himself after All-Stars Kyrie Irving and Kevin Love were injured in the postseason, came two wins shy.

James was superbly dominant during the series, showing why he’s the world’s best player, but the Warriors were simply the better team.

“We ran out of talent,’’ said James, who sat facing his locker with a towel over his head for nearly an hour after the game. “We gave everything we had.’’

Iguodala had the unenviable task of guarding James but did it so well - and contributed strongly to offense - that he was nominated as the player of the series.

With Curry, the team’s first MVP since Wilt Chamberlain, leading them, the Warriors outgunned everyone in the rugged Western Conference and entered the postseason as a No. 1 seed. They swept New Orleans, rallied from a 2-1 deficit to beat Memphis and then blew through Houston in five games to make the finals for the first time since ’75.

They then held off James and the Cavs, who just didn’t have enough.