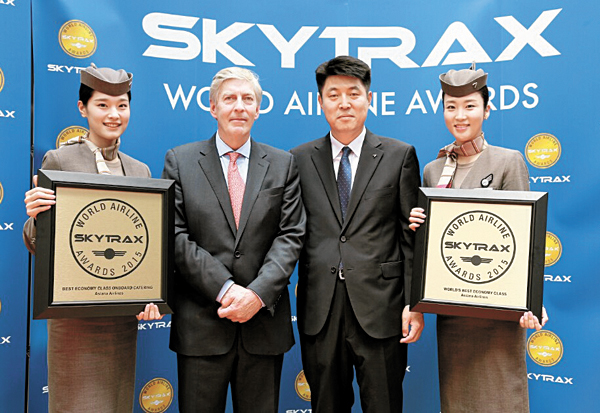 Song Suk-won, executive director of the European division of Asiana Airlines, center right, poses with Skytrax CEO Edward Plaisted after winning two awards at the 2015 Skytrax World Airline Awards held Tuesday in Paris. Asiana Airlines said Wednesday that it won two categories: World’s Best Economy Class and World’s Best Economy Class Onboard Catering. The 2015 Skytrax World Airline Awards was organized by Skytrax, a research firm for the air transport industry, and were held at the International Paris Air Show 2015. It was the second year in a row Asiana won the world’s best economy class award. It won the catering category thanks to its superior in-fight meals including the summer-season dish samgyejuk (chicken soup with ginseng). Provided by the company