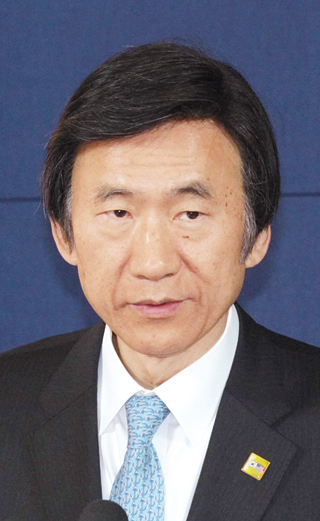 Minister of Foreign Affairs Yun Byung-se is set to attend his first bilateral meeting Sunday with his Japanese counterpart, as Seoul and Tokyo struggle to tackle ongoing diplomatic tensions.

Korea’s Ministry of Foreign affairs on Wednesday announced that Yun will embark on a two-day visit to Tokyo, meant to coincide with the 50th anniversary of the normalization of ties between Korea and Japan.

The foreign ministers have not had one-on-one talks under the Park Geun-hye and Shinzo Abe administrations amid soured diplomatic relations, and the nations’ two leaders have yet to hold a bilateral summit.

Yun and Japanese Foreign Minister Fumio Kishida are expected to discuss the North Korea threat, the situation in Northeast Asia and other bilateral issues. The two have met on other multinational platforms, including in a trilateral foreign ministers’ summit with Beijing that took place in March in Seoul.

However, it has been four years since a Korean foreign minister has traveled to Japan, when a trilateral meeting with China took place in May 2011 under the Lee Myung-bak administration. Yun was initially set to hold a foreign ministerial summit in Tokyo in April 2013, shortly after he took office.

The Foreign Ministry here explained that the two countries have cooperated in holding 294 cultural and academic events and opportunities for civilian exchange, including one scheduled for Monday to be hosted by the Japanese Embassy in Seoul.

The celebration is expected to be attended by Prime Minister Abe’s special envoy, Rep. Fukushiro Nukaga, a member of the Liberal Democratic Party and a political heavyweight who served previously as a finance minister and currently serves as the chairman of the Japan-Korea Parliamentarians’ Union.

As Abe’s special envoy, he is expected to convey the prime minister’s congratulations for the 50th anniversary of the normalization of bilateral ties as well as the statesman’s wishes for an improvement in bilateral ties. Trade Minister Yoon Sang-jick is expected to attend the Japanese Embassy’s event as President Park’s envoy.

A diplomatic source in Japan said, “While there has been some criticism that Chairman Nukaga’s rank does not match that of Foreign Minister Yun, he is a prominent politician who understands the two countries’ relations very well.”

Kishida is expected to attend the 50th anniversary celebratory event hosted by the Korean Embassy in Tokyo, along with key cabinet members of the Abe administration.

In an interview with the Washington Post last week, Park said that Korea and Japan have made “considerable progress” in the negotiations to bring about a resolution for the Imperial Japanese Army’s forceful recruitment of thousands of young women and girls into military brothels during World War II.

Park said the two sides were in the final stage of talks, though Japanese officials have publicly stated that the issue may not be so easily resolved.

Yun and Kishida are expected to discuss Japan’s wartime abuse of those women, who are euphemistically referred to as “comfort women.”