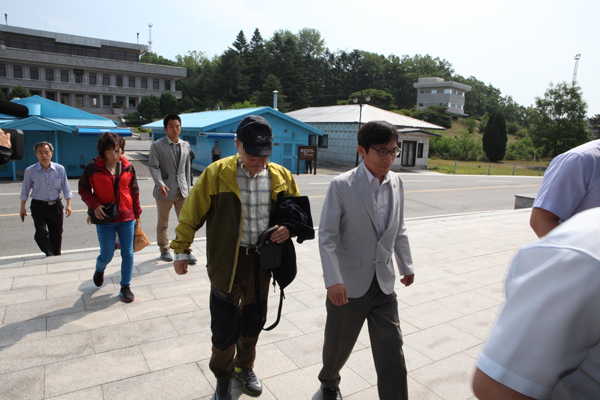 Two nationals return to South Korea on Wednesday through Panmunjom. North Korea repatriated the pair, who managed to make their way to the reclusive country last month by crossing the border from China. [NEWSIS]

North Korea has repatriated two South Koreans who managed to make their way to the reclusive country last month by crossing the border from China, sending them through the Panmunjom, the government in Seoul said.

Officials returned a 59-year-old man, only identified by his surname Lee, and a 51-year-old woman, surnamed Jin, to South Korea at about 10:15 a.m. Wednesday at the truce village.

The Ministry of Unification, in charge of inter-Korean relations, declined to provide details on how or why the two entered North Korea, saying that it needed to question them first.

“We can answer questions over possible motives once we complete an investigation. We have no more information for the time being because the investigation has not begun,” Park Soo-jin, a ministry spokeswoman, said Wednesday during a press briefing. She added that the government would check the pair’s health before questioning them.

Lee and Jin, who a ministry official said were presumed to be married, made it into North Korea on May 11 through a porous border area with China. Details concerning their illegal cross also have yet to be disclosed. The government called for the pair’s release after learning of their disappearance inside North Korea, which Pyongyang accepted without delay.

Its swift response has since raised speculation that the move was intended as a positive overture amid frosty inter-Korean relations.

The repatriation on Wednesday came two days after the North said in a statement that it was open to holding inter-Korean talks, provided that an atmosphere facilitating trust and reconciliation was in place.

“If an atmosphere for trust and reconciliation is provided, there is no reason to hold off on talks between the two governments,” North Korea said in the announcement, which was released under the Democratic People’s Republic of Korea (DPRK), its official name.

The release heightened anticipation that Pyongyang may be feeling a need for an ease in ties, despite it attaching a list of conditions for talks, which includes the demand that Seoul end combined military exercises with the United States.

Still, while the North repatriated both South Koreans on Wednesday, it still holds another four in custody, including a 21-year-old student enrolled at New York University (NYU), and has refused the South’s demand for their immediate release.

Pyongyang contends that two of the South Koreans it detained, Kim Kuk-gi and Choe Chun-gil, are spies sent by South Korea’s National Intelligence Service (NIS) to wage a campaign to vilify the North - a claim Seoul has refuted.