South Korea stays in mind, even in exile

South Korea stays in mind, even in exile 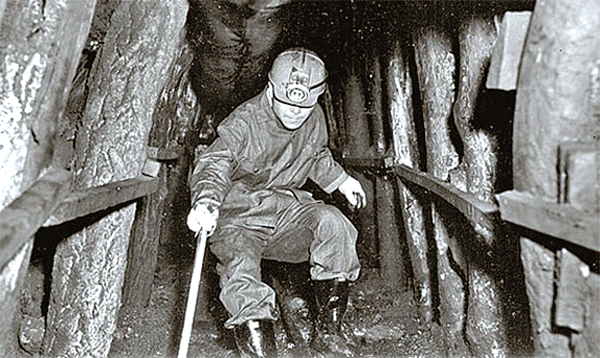 Kim Jong-pil inspects a mine on Aug. 6, 1965, in Gangwon as a lawmaker for the Democratic Republican Party. Provided by Kim Jong-pil

During the two times I stayed abroad in self-imposed exile, I never distanced myself from my thoughts on how to develop Korea as a modern state.

At those times, I was relieved of all my powerful positions in the government, but I never did harbor any disappointment or resentment toward Park Chung Hee or his administration. Instead I used my trips as an invaluable opportunity to widen my perspective and form ideas about national growth.

During my first overseas trip, between Feb. 23 and Oct. 23, 1963, I mostly toured mainland Europe. When I was in West Germany in July 1963, Shin Eung-gyun, the Korean ambassador there, told an interesting story ? that West Germany had been making use of migrant workers from Africa and Southeast Asia to make up for its labor shortage.

Japan had also been providing about 400 men annually in a contract with Berlin, which was about to expire at the end of 1963. 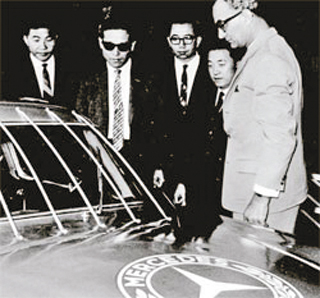 Kim Jong-pil, second from left, visits the headquarters of Mercedes Benz in West Germany in August 1963 during his first self-imposed exile overseas. He later recalled driving a Mercedes Benz on the Autobahn, an event that propelled him to push for the construction of the Gyeongbu Expressway. Provided by Kim Jong-pil

Ambassador Shin told me that West Germany’s Labor Ministry had expressed to the South Korean government its intention to hire 250 miners but had not yet received a reply.

This was when Seoul was in dire need of foreign capital and industrial expertise.

I told the diplomat, “Why has Seoul not replied to the proposal? No one in South Korea knows how important it is to send miners in exchange for foreign capital?” I asked.

The next day, I went with Shin and officials from the West German government to the Hamborn mine. Inside the mine, there was a conveyer belt that carries coal outside above ground. Air circulation on site seemed to be much better than the mines in Korea.

One risk in deploying South Korean men here was the danger of the mine collapsing and trapping them hundreds of feet underground. I spent about an hour in the mine, standing there to look for any features that could prove hazardous. When I returned above ground, every part of my body was covered with coal dust.

The German officials told me that their Japanese workers had begun returning home, with their country on a fast track for economic growth. While they thought about hiring miners from Egypt, India or Pakistan, they preferred Asians because of their diligence and work ethic.

The German officials also seemed surprised that I had spent that much time in the mine, which none of the other foreign officials had dared to do, not even the Japanese.

I judged that Korean miners could withstand the working conditions at the Hamborm mine, so from an office on site, I called Park Chung Hee, the chairman of the Supreme Council for National Reconstruction at the time, and told him about my trip to the mine and that the German government was looking for foreign miners to work there.

He sounded excited about my news and said, “I will immediately work on sending workers there in Germany.”

It was after my conversation with Park that the Korean government swiftly moved to send Korean men to the mines there, and on Dec. 26, 1963, the two governments signed a treaty making official West Germany’s employment of Korean “guest workers.”

The first group of 123 men left for Europe five days later. Until 1977, Seoul dispatched 7,963 miners in total to West Germany who in turn sent back foreign capital to Korea. Along with them, the Park government also dispatched a total of 10,032 nurses to West Germany.

And South Korea’s miners and nurses were soon recognized for their hard work and diligence.

In late 1964, President Park and first lady Yuk Young-soo visited that very mine that I had visited a year and a half ago during a presidential trip. I was in Washington at the time on my second self-imposed exile and heard that they, as well as the hundreds of miners and nurses invited to the gathering, had all shed tears when singing Korea’s national anthem.

My idea to build an expressway in Korea also came about during my trip to West Germany.

In August 1963, I visited the headquarters of Mercedes Benz, and the auto company let me drive one if its cars on the Autobahn.

After driving on a seemingly endless road at 200 kilometers per hour (124 miles per hour), I recognized the need for Korea to have traffic infrastructure just like this.

In 1965, I gave lectures around the country as a member of the Democratic Republican Party on the importance of having an expressway in Korea.

“We need to build an expressway linking Seoul and Busan,” I said. “Someday, we will drive a car with our loved ones in the passenger seats driving at 100 miles an hour on such a road. We all need to work hard to make that day come true.”

As he sat with me he said, “Hey, did you talk about setting up an expressway?”

I said that I had.

“That was exactly what I was thinking about, too,” he replied. “I’ve actually been preparing to build an expressway as a national project.”

“We need to build it right away. We should pursue a day when everyone can commute to any part of the country in just over a day.”