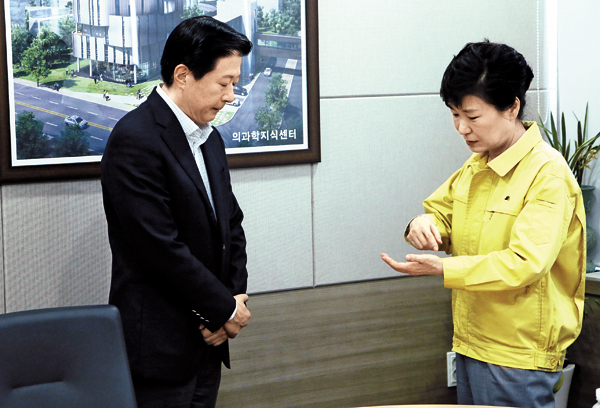 President Park Geun-hye calls on Song Jae-hoon, the director of Samsung Medical Center, to cooperate with the health authority to help curb the MERS outbreak during her visit to the National Institute of Health on Wednesday in Cheongju, North Chungcheong. [Joint Press Corps]

As the outbreak of Middle East respiratory syndrome (MERS) continues unabated with another death confirmed Wednesday, a new worrying development has arisen: The two-week latency period reported in the Middle East appears to be longer in Korea, and people exposed to the disease are showing symptoms more than two weeks later.

This suggests that Korea’s two-week quarantine system may have been inadequate.

The Ministry of Health and Welfare on Wednesday announced eight additional MERS cases, Patients No. 155 to 162, with six of them having contracted the disease at Samsung Medical Center in Seoul, as well as another fatality.

Patient No. 42, a 54-year-old woman, who contracted the disease at Pyeongtaek St. Mary’s Hospital, where Patient No. 1 infected more than 30 people, died on Wednesday, bringing total deaths to 20. 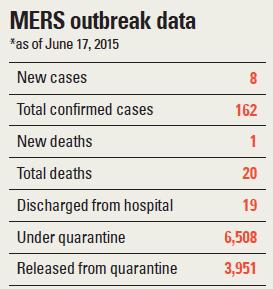 According to the health authority, the patient already suffered from bronchiectasis and high blood pressure. Her death puts the fatality rate at 12.3 percent.

Concerns over the recommended latency period arose in the cases of Patients No. 158 and 161, who did not exhibit symptoms until after two weeks. They were confirmed to have MERS on Tuesday.

“Patient No. 158 visited Samsung Medical Center’s emergency room on May 27, but began to feel ill and experience muscle aches starting June 11,” said Kwon Jun-uk, an official from the Health Ministry.

The emergency room is where Patient No. 14, who has been referred to as a “super-spreader,” infected nearly 80 people so far. He stayed at the hospital from May 27 to 29.

The Pyeongtaek city government in Gyeonggi, where the virus first spread from Patient No. 1, also said Wednesday that a 79-year-old woman, Patient No. 161, tested positive for MERS after she was released from quarantine on Sunday at Pyeongtaek Good Morning Hospital.

Patient No. 161 stayed with Patient No. 17 in the same hospital room at Good Morning Hospital from May 27 to 30, and was quarantined for two weeks.

In the meantime, the hospital conducted tests on her, with the first three coming out negative and the fourth inconclusive.

She was released from the hospital after having spent a full two weeks in quarantine. She returned to a local hospital for treatment, however, when her fifth and sixth tests - carried out after she was discharged - turned out positive. She is currently being treated at the Suwon Hospital of Gyeonggi Medical Center and is reportedly in good condition, exhibiting few symptoms. The woman’s friends and family are now under quarantine.

But this is not the first case in which a patient has begun to exhibit symptoms following the latency period. Patient No. 146, who also visited Samsung Medical Center on May 27, began exhibiting symptoms on Saturday, 17 days later, and was confirmed to have MERS on Sunday.

The Health Ministry at the time stated that the case was exceptional, just prior to the two additional cases reported Wednesday.

The five remaining new patients who contracted the disease from Patient No. 14 at Samsung Medical Center began to exhibit symptoms within two weeks, though the test results came back late, the official said.

In light of both cases, the government is now considering extending the maximum two-week latency period.

“When it came to the latency period, there weren’t any questions [or doubts] from experts or patients,” Kwon said. “At this point, since most cases are due to tests results that came late, it was considered unreasonable to question the maximum time frame.”

“We are still reporting new patients who contracted the disease at Samsung Medical Center [between May 27 and 29] because some of the test results took time to be confirmed,” he added. “On orders from [the health minister], I visited the field yesterday and determined that there won’t be any more delays.”

Concerns over the disease’s spread have remained constant since the outbreak’s start but were renewed Monday when it was reported that Patient No. 152, a 66-year-old man who tested positive for MERS on Monday, had traveled to his villa in South Chungcheong several times even after exhibiting symptoms.

According to the Gangnam District Office, Patient No. 152 had cared for his wife in Samsung Medical Center’s emergency room on May 27, and then developed a fever on June 8, but nevertheless traveled to his villa outside Seoul.

Patient No. 137 was also found to have used Seoul subway line Nos. 2 and 3 for about eight days after showing symptoms, increasing the likelihood that the virus could expand to local communities.

Meanwhile, the presidents overseeing various Samsung Group affiliates vowed extensive innovation at Samsung Medical Center, which has come under fire for its poor management of the disease.

Together the top executives have served as a central management element since Chairman Lee Kun-hee stepped down from his position in 2008 to take responsibility for the prosecution’s investigation into the conglomerate.

After attending a lecture Wednesday by Prof. Oh Won-seok of the Korea Advanced Institute of Science and Technology, the group, made up of some 50 members, met to discuss the MERS outbreak.

The presidents agreed that the group as well as hospital would provide as much support as possible to settle the outbreak. They also assessed that the hospital lacked a proper crisis response system, which required large-scale innovation.

On Wednesday, the president visited the National Institute of Health in Cheongju, North Chungcheong, where she met with Samsung Medical Center Director Song Jae-hoon and called for the hospital’s full cooperation in combatting the outbreak and its spread.

“Samsung Medical Center’s information about the infections must be disclosed transparently,” Park said. “It is very important to come up with a list of patients and visitors and where they traveled during the period when they could have been infected.”

She also visited the central MERS countermeasure headquarters, established at the government complex in Sejong City, where she was briefed by Health Minister Moon Hyung-pyo and demanded cooperation between the private and public sectors and stronger preventive measures.