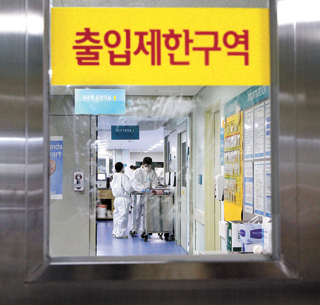 On Tuesday, a 63-year-old husband made the kind of phone call he could have never anticipated to the intensive care unit at Eulji University Hospital in Daejeon, South Chungcheong. He asked a nurse if she could read letters to his 65-year-old wife, a stroke victim who didn’t have long to live.

The hospital was shut down due to the Middle East respiratory syndrome (MERS) outbreak last Monday. About 50 medical staff were put into isolation, along with 20 patients.

His wife was one of them.

The husband and the couple’s two children, who had taken care of the stroke victim while she was in the hospital, were quarantined in their home.

MERS kept the family apart from their dying wife and mother.

Three nurses read the letters from the husband and two children. The stroke victim died about five hours later.

“I’ve seen much sadness in my patients and their families over 14 years,” said Hong Min-jeong, a nurse working in the intensive care unit. “But I’ve never seen such a heartbreaking thing as I did today.”

The MERS infection is separating relatives from their dying loved ones, sometimes of the disease itself. They aren’t able to see the final moments of their loved ones or hold a normal wake and funeral.

Confirmed patients and quarantined family members are not allowed to meet anyone until their quarantines end.

And the bodies of MERS patients who die are sent for cremation within 24 hours.

The three children of an 83-year-old man who died on June 3 in Daejeon did not see his final moments. After the man was confirmed to be infected with MERS, two of his sons were quarantined in their home.

His 80-year-old wife had been admitted to the same hospital for pneumonia, but because of the quarantine, she was forced to watch her husband’s last moments through a window.

The father’s body was sealed in a duffel bag and the entire room where he stayed was fumigated.

Then he was quickly cremated. The couple’s eldest son was the only family member at the father’s cremation. He had not had contact with his father after his infection.

A wake, or Mourning Altar in the local parlance, is an important part of grieving Korean style. But MERS is making that custom difficult.

According to current law, a dead body can’t be buried within 24 of the death in case a crime is discovered to be involved.

But in the case of infectious diseases, the body is allowed to be buried within 24 hours. In the current outbreak, the authorities want to cremate the bodies of MERS patients as soon as possible.

The virus can survive for about 48 hours between zero to 20 degrees Celsius after a patient dies.

“Additional infection can occur because the virus spreads from dead bodies, so we have to cremate them as soon as possible,” an official from the Ministry of Health and Welfare said.

“We are asking for understanding from family members.”