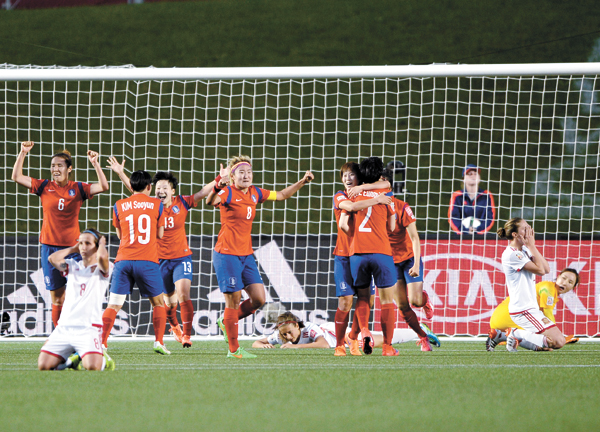 Korea players celebrate after the final whistle in their FIFA Women’s World Cup Group E match against Spain on Thursday (Korean time) in Ottawa, Canada. Korea won 2-1 and reached the Round of 16. [AP/NEWSIS]

When the final whistle was blown, many of the Taegeuk Ladies started to cry. But unlike 12 years ago, these tears weren’t out of sadness.

At the Lansdowne Stadium in Ottawa, Canada, on Thursday (Korean time), world No. 18 Korea collected its first ever victory in the FIFA Women’s World Cup and advanced to the Round of 16 after beating No. 14 Spain 2-1 in their final match of Group E, thanks to goals from captain Cho So-hyun and second-half substitute Kim Soo-yun.

With the victory, Korea finished second in Group E with four points at one win, one draw and one loss. Brazil advanced to the knockout stage as the winner of the group with three wins after beating Costa Rica 1-0 the same day. Costa Rica finished third with two draws and one loss, while Spain wrapped up its first appearance in the World Cup with one draw and two losses.

Korea’s next opponent is No. 3 France, which finished first in Group F. The two nations will go head-to-head at 5 a.m. Monday (Korean time). The winner will face either Germany or Sweden in the quarter finals.

“Today is a stepping stone for Korean women’s football,” said coach Yoon Duk-yeo after the match. “Our goal was to advance to the second round, and I am very pleased that we’ve reached this goal, as our players have gone through many difficulties to follow through with our objective.”

In its first appearance in the FIFA Women’s World Cup in 2003, Korea finished the quadrennial event with three losses, scoring once and surrendering 11 goals. But in the second appearance, Korea’s ladies were unlike in the past.

It took 48 years for the men’s team to collect its first win and reach the knockout stage, after the team with Guus Hiddink did so in 2002. But the women achieved the same result in just 12 years.

However, the history wasn’t made easily. In fact, it was a thriller until the final second.

In the do-or-die match, Korea changed just one player from the starting lineup of the Costa Rica match, putting striker Park Eun-sun up front.

Park, one of two players in the squad to have played in the 2003 FIFA World Cup, didn’t enter the first two matches against Brazil and Costa Rica due to injuries in both her ankles.

In the match against Spain, the 182-centimeter (6-foot) striker used her height and power to hold the ball and then offload to speedy side attackers like Jeon Ga-eul and Kang Yu-mi, as well as team ace Ji So-yun.

But it was Spain, which also needed a victory to reach the next round, that dominated the first half. The European nation scored first and didn’t allow Korea a single shot on goal.

Led by Ignacio Quereda, the squad pressured Korea from the start. Shots from Natalia Pablos threatened goalkeeper Kim, with the attacks finally paying off in the 29th minute. Marta Corredera penetrated the right side of Korea’s defense and delivered a short cross to Veronica Boquete, who tapped the ball with her left foot to score.

Hoping to reverse the tide, Korea replaced right fullback Kim Hye-ri with Kim Soo-yun to stabilize team’s back line. The ladies equalized the game when midfielder Kang delivered a cross from the right flank, which captain Cho converted with a header in the 53rd minute.

Korea made two substitutes after the goal, replacing striker Park with speedy forward Yoo Young-a to penetrate Spain’s defensive line, while substituting Kang with Park Hee-young. However, Spain kept up its offense with Silvia Meseguer and Corredera making threatening shots.

The game-deciding goal in the 78th minute was mostly luck, as Kim Soo-yun’s cross from the right flank somehow became a beautiful chip shot that went over the hands of Spain’s goalkeeper Ainhoa Tirapu.

“I tried to deliver a cross to Young-a, but it became a goal,” Kim said after the match. “At the moment that I felt the ball went in, I just got chills all over my body. I heard there are a lot of fears about Middle East respiratory syndrome (MERS) in Korea, but I hope people can blow away that fear by watching us.”

Lady luck was on Korea’s side until the last second of the match. After four minutes of extra time, Spain’s Sonia Bermudez shot a free kick just outside the penalty box, but it rang off the crossbar and the final whistle was blown just a second after. 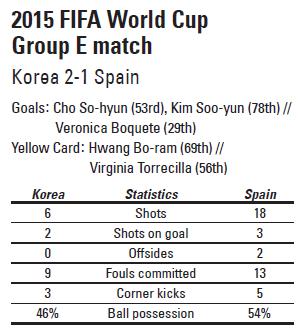 “I have faith in the players,” coach Yoon said. “They have played with passion and this kind of attitude will serve as an opportunity to develop Korean women’s football.”

Although Korea has achieved its goal for this World Cup, Yoon said that the team will look for more in the Round of 16.

“We are pleased to take on the challenge of France, they are a very strong opponent, and leaders in the football world,” the 54-year-old coach said. “We know that, and our team thinks we still have a lot to learn - but we will do our best on the pitch.”