Douglas is in Israel for $1 Million Prize

Douglas is in Israel for $1 Million Prize 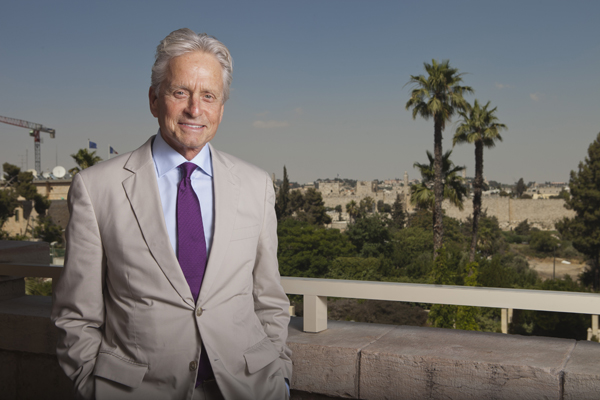 Michael Douglas poses for a photo before an interview with The Associated Press in Jerusalem, Wednesday. Douglas, accompanied by his wife, actress Catherine Zeta-Jones, and their two children, is in Israel this week to accept the Genesis Prize. Jay Leno will host the high-powered event, and Prime Minister Benjamin Netanyahu is scheduled to present the award. [AP/NEWSIS]

JERUSALEM - When actor Michael Douglas learned that he had been chosen to receive the “Jewish Nobel Prize,” he pointed out a small problem: Under strict religious law, the Oscar-winning actor isn’t Jewish.

Douglas, who only recently has embraced his Jewish roots, is vowing to use the $1 million Genesis Prize to build bridges between Israel and increasingly assimilated Jewish communities around the world.

“Abraham’s tent had its flaps open and so hopefully since approximately half of the Jewish population in the world is outside of Israel, we can find ways to better understand each other and to grow together,” Douglas told The Associated Press in an interview.

Douglas, accompanied by his wife, actress Catherine Zeta-Jones, and their two children, is in Israel this week to accept the Genesis Prize. Jay Leno will host the high-powered event, and Prime Minister Benjamin Netanyahu is scheduled to present the award.

Douglas, 70, wearing a light beige suit and purple tie, appeared relaxed and energetic. He said he remains cancer-free after being diagnosed with oral cancer in 2010, and that his marriage to Zeta-Jones is going strong after hitting a rough patch two years ago.

“Catherine is wonderful,” he said. “Our kids are here, and we’re having a fantastic time. Life is good.”

Douglas, known for a career of macho and sometimes morally ambiguous roles, won the Academy Award for best actor for starring in the 1987 movie “Wall Street.” Other films have included “Fatal Attraction,” ‘’Basic Instinct” and “Traffic.” He also won an Emmy in 2013 for his portrayal of Liberace in the HBO production “Behind the Candelabra.” He is set to star in the upcoming superhero movie “Ant-Man.”

For Douglas, the Genesis Prize - to be awarded on Thursday - caps a process that was generations in the making. His father, actor Kirk Douglas, was born Issur Danielovitch to Russian immigrant parents and raised as an Orthodox Jew, but he drifted away from his faith. Michael Douglas’ mother, actress Diane Dill, is not Jewish.

Douglas said he began to be drawn to Judaism after his father survived a 1991 helicopter crash that left two others dead. He said that his father began studying the Bible with a rabbi. “I was certainly touched by that and the spirituality it brought to him,” he said.

More recently, he said his son Dylan had grown interested in Judaism and decided he wanted to have a bar mitzvah, a Jewish coming-of-age ceremony for 13-year-old males.

“So he’s brought a spirituality to our life and an awareness of Judaism that we did not have,” Douglas said. Last year, the family came to Israel after Dylan’s bar mitzvah.

Douglas says he now belongs to a Reform synagogue in New York.

Similar stories are common in the United States, where nearly 60 percent of Jews now marry outside the faith, according to a 2013 Pew Research Center survey.

But in Israel, intermarriages and liberal streams of Judaism popular in the U.S., including the Reform movement, are not recognized by the official rabbinical authorities.

Under a complicated arrangement, Israel allows anyone with at least a Jewish grandparent to qualify for citizenship under its “Law of Return.”

Yet the ultra-Orthodox rabbinate oversees civil services for Jews, including circumcisions, weddings, divorces and burials.

That means that Douglas and his son could theoretically immigrate to the Jewish state, but as the children of intermarriages, they could not marry or have a Jewish burial here. Under Orthodox Jewish law, only people with a Jewish mother are considered Jewish.

Douglas said he raised this issue when the Genesis Prize Foundation approached him about its award. But he said the group was interested in him because he represented so many other people in similar positions. In its announcement, it praised Douglas’ family for its “inclusive approach for Jews of diverse backgrounds.”

Douglas will have his work cut out for him. The Reform and Conservative movements, which are dominant among U.S. Jewry, have struggled for recognition in Israel, providing an occasional source of tension between Israel and American Jews.

Douglas said he realized his selection could raise eyebrows in some quarters of Israel.

“I don’t expect dramatic changes, certainly among the Orthodox and the ultra-Orthodox,” he said. But he said he hoped that Israelis would realize that Jews are a “very very small minority” in the rest of the world and everyone must get along. He said he plans on using his prize money to support a number of Jewish organizations that promote inclusiveness, including the Jewish college organization Hillel.

Douglas comes at a difficult time for Israel and the Jewish people. Anti-Semitism is on the rise in Europe, and Israel has been confronting a burgeoning boycott movement by pro-Palestinian activists who, among other things, have pressured entertainers not to visit Israel.

Douglas said he has not been a target of the boycott movement, but called it “an ugly cancer.”