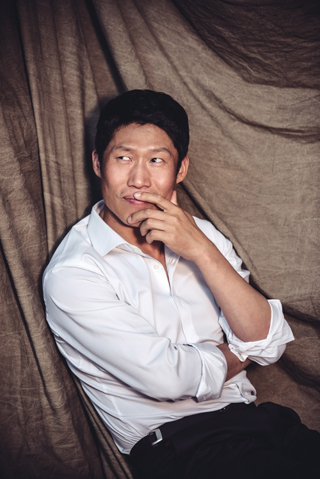 Actor Yoo Hae-jin doesn’t take breaks. Each year he has made at least one new movie in between taking part in TV entertainment shows.

And many of the films he has chosen, including “The Pirates,” have gone down very well with local audiences.

With this level of success, Yoo has made a name for himself in the movie industry.

However, many now think of him as a down-to-earth entertainer as well as an actor, especially after he took part in the KBS entertainment show “One Night, Two Days” in 2013 and went on cable channel tvN’s reality series “Three Meals a Day” last year, where he had to survive rural life by making home appliances with wire and wood and foraging for ingredients to cook with.

The actor sat down with Ilgan Sports, an affiliate of Korea JoongAng Daily, to share what his career means to him.

Q. What are the things you think about when it comes to acting?

A. I often think a lot about what to do and how to act, especially when I’m filming something. I recently watched the movie “Whiplash” and spent some time looking back on my own life. The life of the male lead character seems like the one I had in my 20s. I was really passionate back then, practicing all night and studying acting. I pondered whether I’m maybe too settled compared to how I was back in my 20s. There are a lot of younger actors around, and I often try to watch them acting. There is a lot I can learn from them, so it’s really helpful.

Do you believe viewers think you have a friendly manner?

I’m just thankful that people say [nice things] about me. But I keep on questioning whether I deserve them. I think a lot about living a good life. I try to reflect on that a lot because it’s not living a good life if I’m the only one.

You haven’t done a TV drama since 2005. Do you have any plans to do one in future?

I would do it if I found a good piece. But one thing I’m worried about is now I’m too used to the movie production system, so I fear that I wouldn’t do well making a drama.

What do you do in your free time?

I’ve liked looking at artwork since I was young. I wouldn’t get on a plane just to see a certain piece of art overseas, but I always enjoy going to modern art museums whenever I go abroad. When I see art, I don’t read the information given in the pamphlets. I just like being amazed by the feelings and ideas I get from just looking at it. In the same sense, I’m very cautious about telling the audience what to look for in the movie that I’m in.

You also like hiking. How often do you go?

Of course, it’s a good workout. Now it’s my everyday habit; it feels weird to not go. The funny thing is that every time I go it’s so hard. It’s like acting. You can’t rely on gimmicks when you act, and it’s difficult every time I do it.

How do you want people to remember you?

I hope the title “actor” doesn’t seem too awkward when people think of me. That would be more than enough. I want to be good enough so that I don’t have to feel sorry about continuing to act for a living.