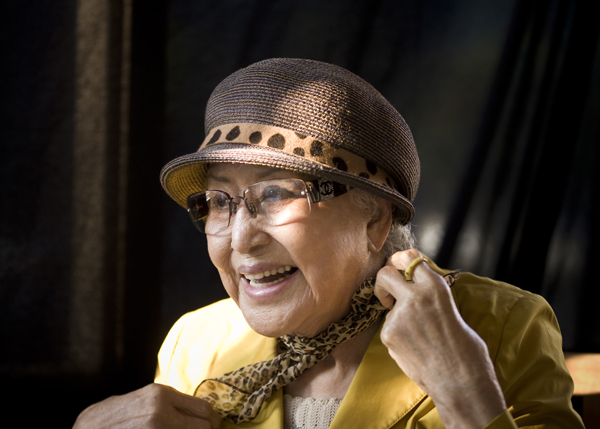 “Woman of the 20th century” and “divisive actress” are some of the labels used to describe Choi Eun-hee, who enjoyed her heyday in the 1960s.

The 88-year-old, who has featured in around 80 films, led a dynamic life punctuated by miserable moments after starting out as an actress in the early 1940s. She was abducted to North Korea twice and also underwent two divorces, which was uncommon at the time in Korea.

Choi split with her first husband, director of photography Kim Hak-sung, whom she married at a young age. She then wed her second husband, director Shin Sang-ok, in 1953, but the marriage failed because he was adulterous. The two later got back together, however.

The actress was first kidnapped by a North Korean spy in 1978 while visiting Hong Kong to discuss the movie “Poppy Flower,” which she was supposed to star in.

In July that same year, Shin was also abducted when he visited the country to look for Choi. 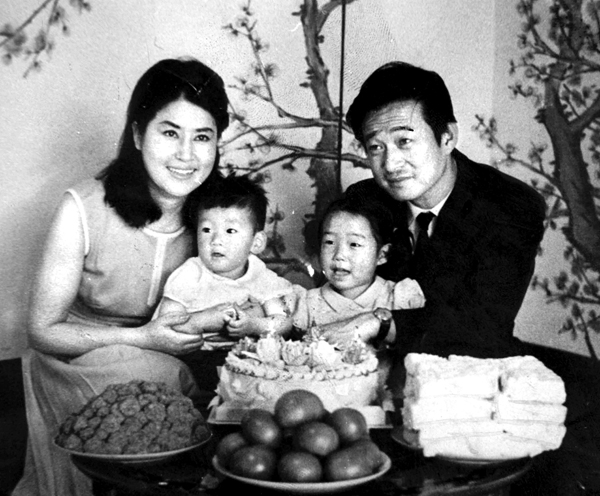 However, the two were able to escape from North Korea for Vienna in 1986 when they were permitted to travel abroad.

Unfortunately, Choi was taken to North Korea against her will once again - 28 years after finally being freed from the country.

Although the actress has led such a dynamic past, she is currently living a quiet and peaceful life at a hospital located in Yongin, Gyeonggi, to undergo kidney dialysis and treat spinal stenosis.

Q. Are you ever lonely at the hospital?

A. I actually take comfort from the fact that there are a lot of sick people other than me in the hospital. I don’t think suffering from sicknesses is something that a person can choose, so I just believe this is my fate. I get to think about the glamorous yet painful life I led in the past. I also find myself thinking how I led my life and how to spend the rest of my days. Based on my experience, I’ve learned that getting old means earning more freedom. 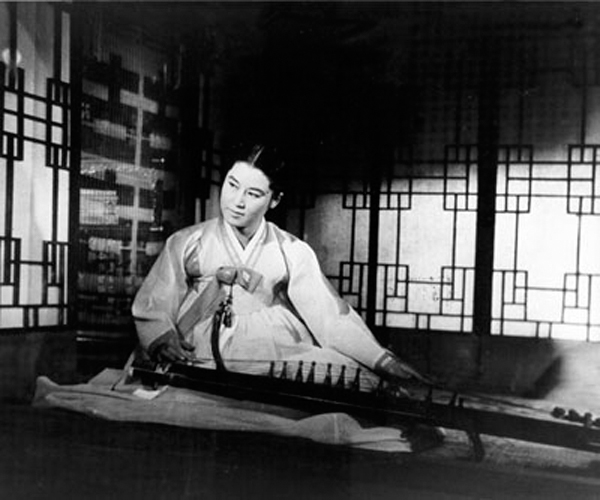 In the early 1960s, Choi Eun-hee starred in many films directed by her ex-husband, Shin Sang-ok. Among them, three movies released in 1961 were especially popular. “Seong Chun-hyang,” in which Choi is portrayed as Korea’s classic heroine Chun-hyang

Do you ever think about your second husband, Shin?

Even now he appears in my dreams every day. Although I can’t talk to him, he’s always doing something such as writing a script or reading a book. We all know he was always deeply engaged in movies - he didn’t even smoke a cigarette or drink alcohol. I’m guessing he is still directing movies, even in heaven.

Can you be sure he’s in heaven?

What do you mean? He didn’t commit a grave sin, even though he did make my life a little difficult [when he committed adultery]. In a recent dream I had, he was worrying deeply about not having enough money to cover production costs, which made me feel very sorry for him. I hope he’s living a good life in heaven.

You became a Catholic when you moved to America.

Look at the ring I’m wearing. This is the ring for the rosary. Even though I can’t go to church due to my symptoms, there is not a day that passes by without me saying the rosary. I pray for the health and peace of all the people I have known in my life. I was baptized by Catholic priest Lee Kyung-jae. My baptismal name is Theresa Shin. I got the surname from Shin. People call me Theresa in the hospital, which makes them doubt that I am Choi Eun-hee. Isn’t that funny? 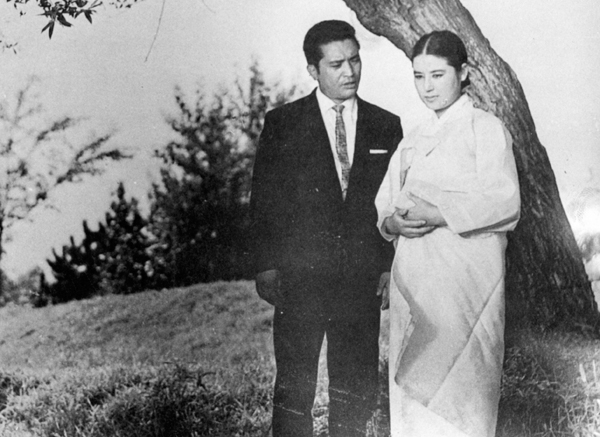 “Mother and Her Guest,” in which Choi plays the role of a young widow who gives up love.

How did you feel about Shin having children with actress Oh Soo-mi while you were still married to him?

I hated him for what he did. I hated him so much that I almost wanted to kill him. I tried to understand him having a child with Oh, but I couldn’t accept it when he had two children with her. Since I believed the biological mother should be the one to raise the children, I knew the situation would make me become the third wheel. So even though I still loved Shin, I divorced him.

After five years, however, I met him again in Pyongyang. He told me that he looked for me thoroughly there while making several attempts to run away from North Korea. It made me forgive him right away. It felt like I had the entire world on my side.

When the war started, I remained in Seoul. But I was soon forced to enter North Korea’s army. During the daytime I practiced acting, and I had to take ideological education at night. 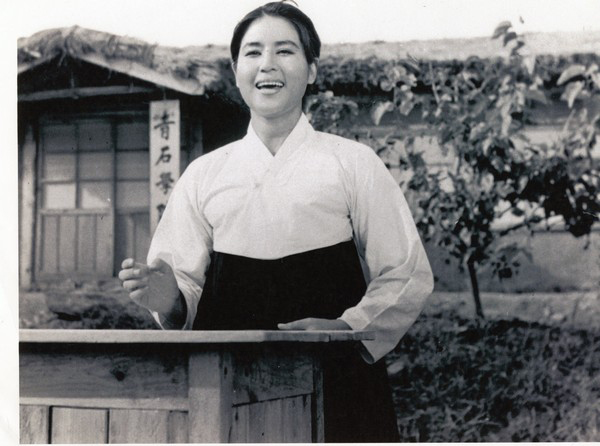 “Evergreen Tree” (1961) in which Choi is a modern woman who moves to the countryside to educate people during the Japanese colonial period (1910-45).

However, I ran away after following the North Korean People’s Army, who were retreating to Sunchon County, South Pyongang Province. What’s funny is that I had to put on a performance at a military camp for South Korea, which I believe shows the irony of the division of South and North Korea. I don’t think such a war should ever be repeated.

You got abducted again 28 years later. What happened?

I already forgave the North Korean leader who ordered to take me to the peninsula. It was such a long time ago.

But please don’t misunderstand that my forgiveness of him means I agree with the North Korean system, because I don’t.

Was the escape from North Korea just like a movie?

I still have nightmares about being chased by North Korean agents. It feels like somebody is always chasing me. People who haven’t experienced this will never know the feeling.

When I see the news these days, North Korea is portrayed as a country that has become more democratic than in the past. However, based on my personal experience, I do not believe such reports because even the content on the radio channels there is manipulated by the leaders.

When I saw the sign that said “Welcome to West” at the American Embassy in Austria, I cried my eyes out.

What do you think your life would have been like if you hadn’t been kidnapped?

When I was abducted to North Korea, I was desperate because I lost all my family and friends. At the time I only concentrated on working in order to get over my divorce from Shin.

I also remember former [South Korean] President Park Chung Hee. Due to his strict censorship on movies, “Shin Film,” [the first Korean film company, managed by Shin], had to shut down.

Even though the Korean movie industry regressed under the Park regime, I can’t deny that he truly worked for the country instead of fulfilling his individual greed, which is a tendency I observe in today’s politicians.

Your parents named you Kyung-soon. Why did you change your name?

That question is so personal. But to tell you the truth, Eun-hee is the name of one of the main characters that appears in one of the works of [the writer] Park Hwa-sung. I thought Eun-hee sounded very cool. Since I thought the character “soon” sounded a little countrified, I changed my name.

You always seem to emphasize that actors need to have a lot of pride.

If actors don’t have pride, they will not be able to resist the hardships and temptations [they experience as actors].

I’m not talking about boasting about oneself or feeling more superior than others, but rather an attitude that makes the person refrain from feeling shame.

Even though it may seem I have led a glamorous life, I definitely haven’t. I don’t even have proper jewelry. I always moved from one location to another to work on films.

I also couldn’t earn a guaranteed salary when I was working on Shin’s movies, so there was never a time in my life when I could squander money.

In fact, my favorite song is singer Kim Do-hyang’s “I’ve Lived Like a Fool,” which I have chosen to be played at my funeral.

You have four children. Do they treat you well even though you are not their biological mother?

Since I couldn’t get pregnant, I adopted a girl and a boy. I also have two of Oh’s children. I feel remorse that I couldn’t properly take care of them because I was kidnapped. But I’m grateful that all the four children grew up well. They bring nice food to me at the hospital and often call to check in on me.

I believe the connection between me and my children is a fate that was determined by God.

Is there a specific moment you want to go back to?

There was a time when I lived in the United States after being abandoned by both South and North Korea. I had a happy family there [Shin and the children]. During those days, I felt the happiness that an ordinary wife could enjoy for the first time in my life.

One of my biggest regrets is not establishing a memorial hall for Shin. Next year marks the 10th anniversary of his death. I’ve saved his possessions, along with mine. I also haven’t sold the white Benz he bought me in the United States.

If you could repeat your life all over again would you still marry Shin?

I don’t think that would be necessary. He was more like a boyfriend than a husband. Also, no matter how good the past was, I don’t want to repeat it. That’s how I honestly feel right now.

You mentioned that an actor has to be a great person.

Yes. That is because an actor needs to be able to sympathize with the feelings of others in order to act well. I believe a kind heart, looks, speech, skills and the ability to write are the five qualifications of a good actor.

Of course, a kind heart is the most important factor of the five. In this respect, my favorite actress is Han Eun-jin. She had great acting skills and was also very kind-hearted.

However, Kim Seung-ho, who was a highly talented actor, was too greedy and never considered his fellow actors.

Do you believe appearance can be an asset?

Appearance comes after having a kind heart. These days, all the actors look the same. I guess it’s because the majority of them undergo too much plastic surgery. I want to say that having something that sets an actor apart from other actors is very important. Otherwise their acting career will not last long.