Germans win Koreans over to hatchbacks

Germans win Koreans over to hatchbacks 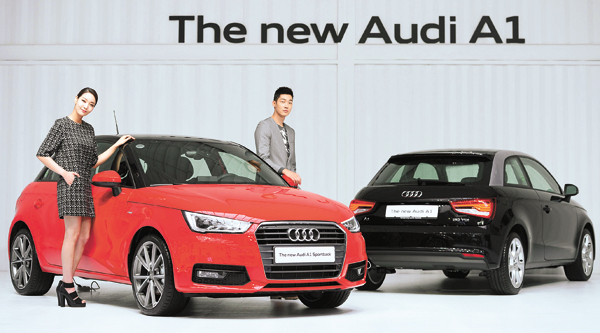 A competition to get Koreans to buy hatchbacks has begun among foreign automakers amid an increasing popularity in such premium, compact cars.

Korean automakers have traditionally shrugged off hatchbacks as they wanted consumers to drive away in sedans and SUVs. That leaves the market to foreign brands led by German automakers, who are targeting young Korean drivers in their 20s and 30s in search of models that provide economic efficiency and stylish design at reasonable prices.

On Thursday, Audi Korea unveiled the new A1 hatchback in Gangnam District, southern Seoul. It is an upgraded edition of the first-generation 2010 model that was introduced in Europe in August 2010. It is the smallest car in Audi’s entire lineup and the company has sold more than 500,000 units of A1 internationally.

It is the first time that Audi started selling this hatchback in Korea.

The model comes with a 1.6-liter TDI diesel engine that satisfies the Euro 6 standard and a seven-speed S-tronic auto transmission that offers 115 horsepower, 23.5 kilogram-meters (170 foot-pounds) of torque and fuel efficiency of 16.1 kilometers per liter (37.9 miles per gallon).

The company added that consumers will be able to enjoy the fun of driving along with economic efficiency with this small-size car since the Audi Drive Select system, which determines the quality of the driving experience, engine, steering, shock absorbers and the sport differential, comes as a basic option. With the system, drivers can choose between dynamic, efficiency and auto driving modes.

The company said it aims to sell 500 units of the A1 in the next seven months and the primary target is the young generations in their 20s and 30s.

“We have seen demand for compact size cars like hatchbacks consistently increase, particularly among young consumers,” said Audi Korea CEO Johannes Thammer. “It is a trend worldwide and we believe that the Korean hatchback market will grow up to 10,000 units per year between 2018 and 2012. Under the circumstances, it is very important to introduce such entry-level compact cars to young generations, who are considered one of the most important customer groups for foreign brands. We expect to make a market share of 15 percent in the Korean hatchback market.”

“The price gap is because the models sold in Korea have more premium options than the models in Europe, which are based on a manual transmission, which isn’t available in Korea,” said Thammer. The A1 installed xenon headlights, LED taillights, as well as Audi’s entertainment system Multi-Media Interface with a 6.5-inch full-color navigation to all trims.

Earlier this month, BMW Korea also started selling its new 1 Series, the second-generation of a sporty rear-wheel-drive. The predecessor of the model 118d was Korea’s leading imported hatchback as it sold 1,625 units through May this year.

The new Polo by Volkswagen Korea is also popular as it sold 200 units through May after it was introduced in April.

While the foreign brands are riding high, Korean automakers struggle in the hatchback market. Kia only sold 1,388 units of its Pride while GM Korea sold 471 units of the Aveo through May. The situation doesn’t stress Korean automakers much.

“The reason we’re not investing big in the domestic hatchback market is because they’re not popular here,” Hwang Kwan-sik, spokesman of Hyundai Motor, told the Korean JoongAng Daily.

“The reason that some foreign brands are popular is the brand value that those companies have. Consumers buying Hyundai cars seek efficiency. They want a bigger trunk and interior space with high fuel efficiency and stronger driving power.”