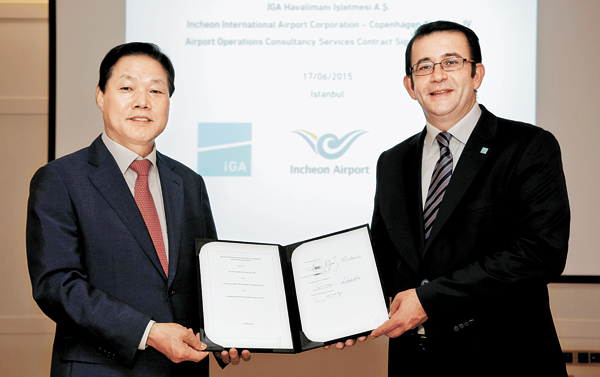 Incheon International Airport obtained a consulting project worth 12.9 billion won ($11.7 million) from Istanbul New Airport of Turkey, which will be the world’s largest international airport when it opens in 2017.

Turkey already has a main international transport hub - Ataturk Airport - but it is too small to keep up with the increasing number of visitors to the Middle Eastern nation, according to Incheon International Airport. The New Airport, located near the Black Sea, will handle an estimated 180 million visitors annually when fully operational.

The two airports will jointly provide consultation through October 2020 on airport operation strategies, establishing organizational structure and attracting private companies to fill up the commercial areas.

The Korean and Danish airports were selected for their airport construction and management capabilities, particularly in customer service and duty-free sales.

The main developer of the Istanbul New Airport is a consortium of five Turkish construction companies called IGA, which obtained licenses to construct the airport and control its operations for the next 25 years. IGA hopes the airport’s size will make it competitive with transit hubs in other Middle Eastern countries like Dubai and Abu Dhabi.

“Incheon and Copenhagen airports have the worldwide recognition with their airport management,” said Mertol Genc, CEO of IGA, at the contract ceremony held in Istanbul, Turkey. “We hope the two airports contribute in developing the New Airport to become the next hub airport for southern Europe and the Middle East.”

Since 2007, the airport has received 20 other consulting projects from 10 countries worth $71.8 million.