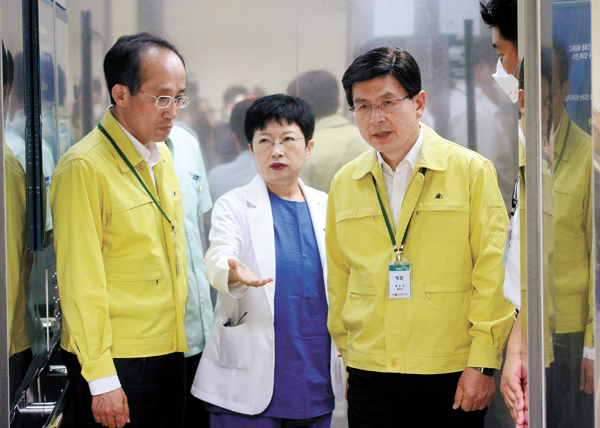 Shortly after the appointment ceremony at the Blue House at 3 p.m., Hwang started his term as prime minister by visiting the National Medical Center, where 10 MERS patients were being treated.

“The people’s lives and safety are the most important value for the existence of a nation, but the public’s fear of MERS continues,” Hwang said after being briefed about the situation. “I feel heavily responsible as the prime minister.”

Hwang said he will lead efforts to end the outbreak by playing the role of a “control tower,” the Korean term for the center of a crisis control response. The Park Geun-hye administration is being pilloried for its late and disorganized response to the national crisis and its inability to curb the outbreak.

The new prime minister also vowed to mobilize military medical forces and government staffers to help doctors and nurses at hospitals, many of whom are exhausted from the month-long battle against MERS. The promise came later in the afternoon when he hosted a meeting with ministers to address the outbreak.

“All unnecessary discussions and bureaucratic procedures will be minimized so that problems can be resolved speedily,” Hwang said.

He also stressed that the government must push forward bold and strong measures preemptively to beat the spread of the infection. “Starting today until the end of the outbreak, I will be on emergency duty,” he said.

Hwang said the government will not hesitate to temporarily shut down poorly managed medical institutions with confirmed patients.

“Since concerns are still lingering about some hospitals, we will use all possible resources to prevent any mistake this time,” he said. “The Prime Minister’s Office will directly oversee Samsung Medical Center in particular and other major hospitals to speedily improve the situation.”

Samsung Medical Center has been under fire for its poor monitoring and quarantine of infected patients and medical workers. The hospital announced Sunday it would not accept visitors or new patients in an effort to keep the outbreak from infecting more people.

Hwang also urged public cooperation in the government’s quarantine efforts and asked people to refrain from visiting hospitals to comfort
patients unless it is absolutely necessary.

Earlier in the morning, ruling and opposition lawmakers voted on Park’s nomination of Hwang, who served as Park’s justice minister since February 2013. Of the 298 lawmakers of the National Assembly, 279 attended the voting and 156 voted for the resolution while 120 voted against it. Two abstained.

The votes appeared to be split between the two main parties.

From the ruling Saenuri Party, 156 lawmakers came to vote, while 119 representatives from the main opposition New Politics Alliance for Democracy (NPAD) attended. Three independent lawmakers including National Assembly Speaker Chung Ui-hwa, a former Saenuri member who surrendered his party affiliation after being elected to the post, also voted. Five lawmakers from the liberal opposition Justice Party boycotted the vote.

The 56.1 percent approval for Park’s third prime minister - and the nation’s 44th - was the third lowest since the legislature introduced the confirmation hearing system in 2000. It is slightly higher than for his predecessor, Lee Wan-koo, confirmed by 52.7 percent of the legislature, but far lower than the 72.4 percent for Chung Hong-won, Park’s first prime minister.

After the vote, Saenuri Chairman Kim Moo-sung said he was satisfied that all 156 Saenuri lawmakers who attended the session supported the nomination. The ruling party has 160 members in the legislature, enough to confirm the appointment on its own.

When the National Assembly voted on Lee’s confirmation in February, at least four lawmakers from the ruling party cast votes against him. The former Saenuri floor leader stepped down on April 27 over a massive payoff scandal.

Saenuri floor leader Yoo Seong-min said Hwang’s top priority should be ending the MERS outbreak. “The MERS crisis is extremely serious,” Yoo said. “As the prime minister, he must control the administration firmly and end this crisis.”

The NPAD said the opposition will not relax its monitoring of the prime minister, but will cooperate with him to end the MERS crisis.