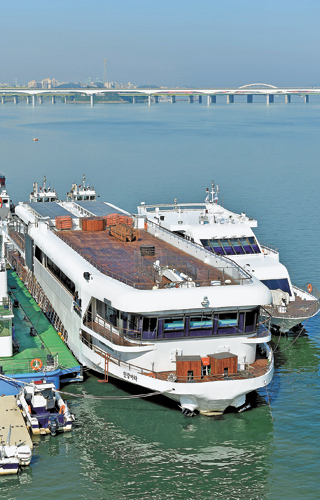 The Seoul Metropolitan Government is looking for a private operator to take over the Han River Ara cruise ship due to its high maintenance costs. [NEWSIS]

In 2009, Oh Se-hoon, the mayor of Seoul at the time, launched an ambitious plan to construct the Han River Ara cruise ship. The ship was built the following year with 11.2 billion won ($10 million) and completed its trial sails in 2011.

But the project is currently idle, and the Han River Ara continues to sit anchored at a dock in Yeouido, western Seoul.

While the ship was intended for tourism and entertainment, it is used only about twice a month by the city and district governments for public relations purposes.

And though the Seoul Metropolitan government spends 100 million won just for the ship’s insurance and maintenance, the vessel has brought in miniscule profits.

The vessel was originally meant to offer opportunities for entertainment at a reasonable cost, and a concert hall capable of seating about 150 people was set up inside to be used for product launches.

But the Han River Ara, which never officially opened, has now become a headache for the city government, particularly amid a disagreement over the West Sea Waterway Project, which aimed to link the Han River with the Yellow Sea.

Oh originally planned for the ship to operate through the waterway, but the Seoul Metropolitan Council, controlled by the main opposition party, opposed the plan.

After current Mayor Park Won-soon took office in 2011, the city government decided to sell the ship due to its high management costs.

Still, nothing has changed.

Since May 2013, the city government has failed to find a private operator for the ship despite holding four sales processes, and the regional government even lowered the ship’s price to 9 billion won in its fourth attempt.

“The price cannot go below 9 billion won because it could be seen as giving an unfair advantage to a certain buyer,” said Song Dae-sik, an official from the Han River Project Headquarters, the cruise operator and an affiliate of the city government.

The main reason attracting buyers has been difficult is due to the infrastructure needed to operate the cruise ship.

Of the seven cruise ships operating on the Han River, the largest is 430 tons. But because the Han River Ara is 688 tons, it would be difficult to build a dock for the ship without support from the regional government.

The city government will push disposal procedures by the end of this year.

Sin Hueng-Gyo, another official from the headquarters, said it is currently looking for a private operator.

“If the cruise is run by a private operator, the cruise ship business on the Han River - which is monopolized - will be more competitive,” Sin said.