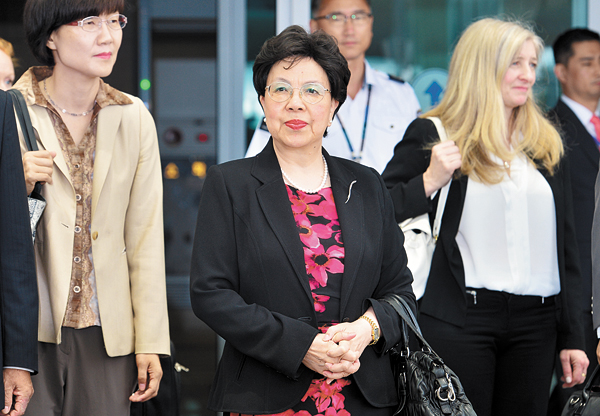 World Health Organization Secretary General Margaret Chan arrives in Korea on Thursday. During her visit, she will attend a conference by the International Council of Nurses, which runs from Friday to Tuesday, and give advice regarding the outbreak here of Middle East respiratory syndrome (MERS). [NEWSIS]

The outbreak of Middle East respiratory syndrome (MERS) appears to be letting up somewhat, with no additional infections from Samsung Medical Center’s emergency room, ground zero for the disease, reported Thursday. A total of 4,492 people had been released from quarantine as of Thursday. But the Ministry of Health and Welfare did announce three new patients, bringing the total number of MERS cases in Korea up to 165.

Of the three, none was found to have been infected in the medical center’s emergency room, making Thursday the first day since June 4 - when a doctor there who treated a patient next to Patient No. 14 was confirmed for MERS - that the ministry has not reported any new cases. 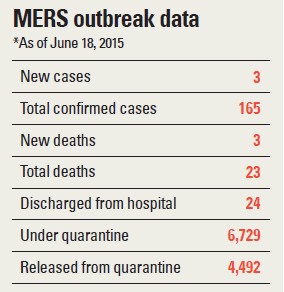 Patient No. 14 was treated from May 27 to 29 in Samsung Medical Center’s emergency room, where the disease spread to dozens of others.

But while it’s unlikely that the patient has spread the virus to anyone else, there’s still the possibility that Patient No. 137, an emergency room aide, could have exposed others while he was outside quarantine until June 10. 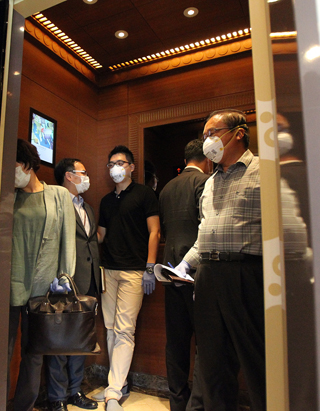 Epidemiologists and officials from the Jeju Provincial Government on Thursday take an elevator to the room at the Shilla Hotel in Jeju where Patient No. 141 stayed while he and his family traveled on the island from June 5 to 8. [NEWSIS]

The hospital will be partially shut down until June 24, to cover the required two-week latency period for MERS. Two of the newest patients, Patients No. 163 and 164, work as nurses and treated MERS patients.

Patient No. 165 is a hospitalized patient at Kyung Hee University Hospital in Gangdong District, eastern Seoul, where Patient No. 76 was treated.

But because Patient No. 76 stayed in the emergency room, the health authority is trying to determine how exactly the disease could have been transmitted.

So far, 30 out of 165 confirmed MERS patients, or 18 percent, are medical staff members who have fought the virus on the front lines. Still, it seems that even wearing protective clothing hasn’t been completely protecting them from catching the disease.

Patient No. 164 reportedly did not wear some of the protective gear, and the government is still looking into how she may have been infected. Patient No. 162, a 33-year-old x-ray engineer at Samsung Medical Center, also contracted MERS when he conducted x-rays for Patients No. 72, 80, 135 and 137 from June 11 to 12.

D-level is the lowest level of protective clothing and includes a suit, goggles, a mask, gloves and overshoes. A-level is the highest and completely protects the wearer from outside exposure.

“[Guidelines] suggest wearing D-level devices, but [the medical workers were] not well protected because they only wore some of the gear,” said Kwon Deok-cheol, an official at the Health Ministry.

Yet even though reported cases tracing back to Samsung Medical Center are currently on the downswing, concerns remain.

Asan Chungmu Hospital in South Chungcheong, where Patient No. 163 is employed, completely shut down on Thursday over the possibility that it could become a third base for the disease’s spread.

Initial test results suggested that 10 other nurses have been infected, though the results were still inconclusive. All inpatients, except suspected MERS patients, were discharged from the hospital and it is no longer accepting outpatients.

The Shilla Hotel on Jeju Island also closed on Thursday after Patient No. 141, who was confirmed for MERS on Saturday, was found to have traveled to Jeju Island from June 5 to 8 with family and friends.

The 42-year-old man visited a horseback-riding course and a theme park while in Jeju. The Health Ministry immediately isolated 56 people, including those who accompanied him on the trip, hotel employees and flight attendants.

Patient No. 141 contracted the disease while visiting the Samsung Medical Center’s outpatient ward with his father on May 27.

The man made headlines over the weekend, however, when he opted instead to visit Gangnam Severance Hospital via taxi after showing symptoms, even though the Gangnam Community Health Center had sent an ambulance to pick him up.

However, he fled the hospital before he could be put in isolation or confirmed, charging out of the building and going home again via taxi.

Health workers reported that the man was enraged and had shouted that he would spread “MERS to everyone” if he tested positive.

Patient No. 137, who was exposed to Patient No. 14 at Samsung Medical Center, also continued to go out in public until June 10, using the subway system and visiting a hair salon and a mall.