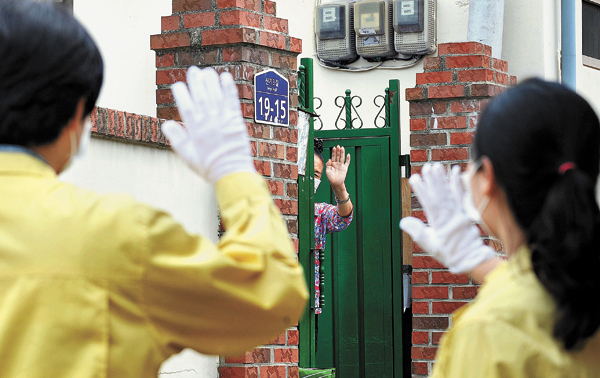 A 70-year-old woman quarantined due to possible exposure to Middle East respiratory syndrome (MERS) thanks officials from the Okcheon County Office who delivered daily necessities to her on Wednesday. By Kim Seong-tae

On Monday, Lee Mun-seong, a 56-year-old civil servant for the Okcheon County government in North Chungcheong received a call on his cell phone.

The caller, an elderly woman in her 80s, is currently under quarantine in her home after having been exposed to a patient diagnosed with Middle East respiratory syndrome (MERS), a potentially fatal disease that has swept Korea over the past month. 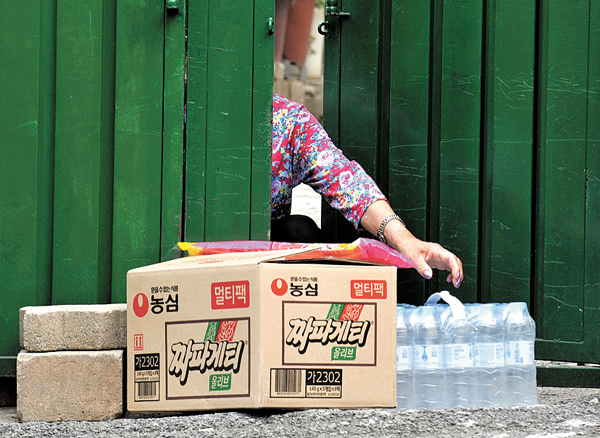 Okcheon County officials place supplies in front of a house where a resident is quarantined. By Kim Seong-tae

“I’ll be there,” Lee answered.

He left the county office and stopped by the supermarket for kimchi, potatoes and onions when it occurred to him that adding chunks of pork in the soup might make it more delicious. So he went to the butcher and ordered a geun, or about half a kilogram (1.1 pounds), of pork neck.

“Aren’t you supposed to be working?” the man behind the counter asked.

When Lee explained the situation, the butcher handed him an extra half geun.

“She needs to stay healthy.”

Once he got to the gate outside the woman’s house, he called her from outside to let her know to pick it up.

She asked how much the groceries cost.

He explained later, “I can’t really take any money from her because she’s also taking care of her husband, who’s got bad asthma.”

In the month since MERS has rapidly spread across the nation, civil servants and public health care center employees here, like Lee, have dedicated themselves to helping residents in the county quarantined for potential exposure to the disease ? efforts that could likely serve as a model for the government on what it can do for the public in times of crisis.

Currently, 160 workers serve 80 people who have been under quarantine since June 8. After visiting the hospital where Patient No. 90 was confirmed to have been treated, they were forced to isolate themselves at home to keep the virus from escalating.

Sixty-six employees from the local public health center were initially in charge of caring for them, and 94 county civil servants joined in the effort on June 9.

Two employees take care of each quarantined resident, who is questioned about his or her physical condition and possible needs. The civil servants will practically do anything, from delivering medicine and daily necessities to irrigating rice paddies and paying utility bills.

Civil servant Lee Seon-ok, 40, is currently caring for a woman in her 70s who sells potatoes and collects wastepaper for a living.

On Monday, Lee collected wastepaper for the septuagenarian, putting 10 kilograms (22 pounds) of paper in front of the resident’s home. She also called the recycling center, receiving 800 won (72 cents) for the load.

“[The woman] looked so happy,” Lee said, “and said that now she could buy a carton of milk.”

Similarly, Do Jae-seon, a 46-year-old working at one of the county’s town offices, was asked by the quarantined woman he was caring for to send 300,000 won ($270) to her father-in-law, which required her to give him her debit card and password information.

“It felt good to be trusted so much,” he said.

When she heard about a local farmer who could not harvest his zucchini crop due to crisis measures, she called the county office, which gave the man 5 million won in compensation.

Having 160 county workers caring for those in isolation can sometimes cause certain inconveniences, but other county residents have also done their part.

One civil servant noted that outside visitors to the county office often cooperate, offering to wait.

So far there have been no reports of confirmed MERS cases in Okcheon County, and the 80 people currently under quarantine are scheduled to have their restrictions lifted on Monday.